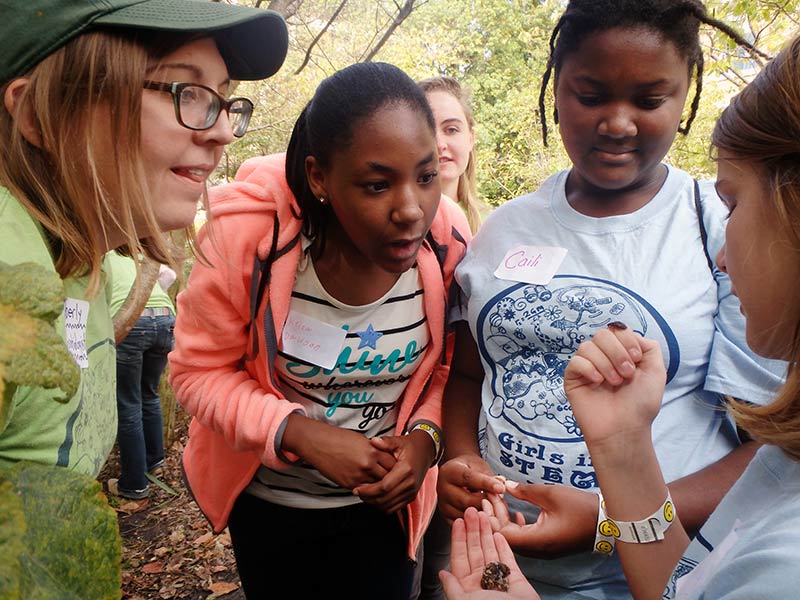 Middle school girls examine a bug during a Girls in STEM (GiST) program at Tulane University. (Photo from Girls in STEM)

Studies have long shown that girls are less likely than boys to be interested in math and science, but new research by Tulane University researchers published in the journal Social Psychological and Personality Science suggests that matching girls with female role models could dramatically reverse that trend.

Led by Laurie O’Brien, an associate professor of psychology at Tulane, the study, “Improving Girls’ Sense of Fit in Science: Increasing the Impact of Role Models,” was conducted during a science outreach event where middle-school girls were exposed to multiple female role models.

At the end of the event, participants were randomly assigned to choose and write about a favorite role model, or workshop leader, while a control group was asked to write about their best friend. Girls who wrote about their favorite workshop leaders experienced a significant increase in sense of fit in science whereas girls in the control group did not. O’Brien thinks the idea of writing about a favorite role model encouraged girls to think more in depth about both the role models and science.

“We believe that the results of our study suggest that science outreach programs for girls such as GiST may help to make girls feel like they belong in science."

“ ‘Sense of fit’ in science refers to a person’s overall sense that they belong in and can succeed in science,” O’Brien said. “Past research has demonstrated that ‘sense of fit’ is important because it affects students’ grades and career decisions.”

The event was part of the Girls in STEM (GiST) program at Tulane, where girls participated in such workshops as “Creative Computation,” “The Science of Bread” and “Tissue Engineering.” Created by Donata Henry, a senior professor of practice in ecology and evolutionary biology, the annual program gave middle school girls the opportunity to spend the day working with female scientists and female students in the School of Science and Engineering.

“We believe that the results of our study suggest that science outreach programs for girls such as GiST may help to make girls feel like they belong in science, especially if girls are encouraged to identify with female role models,” O’Brien said. “We plan to continue our research with GiST so that we can identify ways to maximize the positive impact of female role models on adolescent girls' interest in science.”