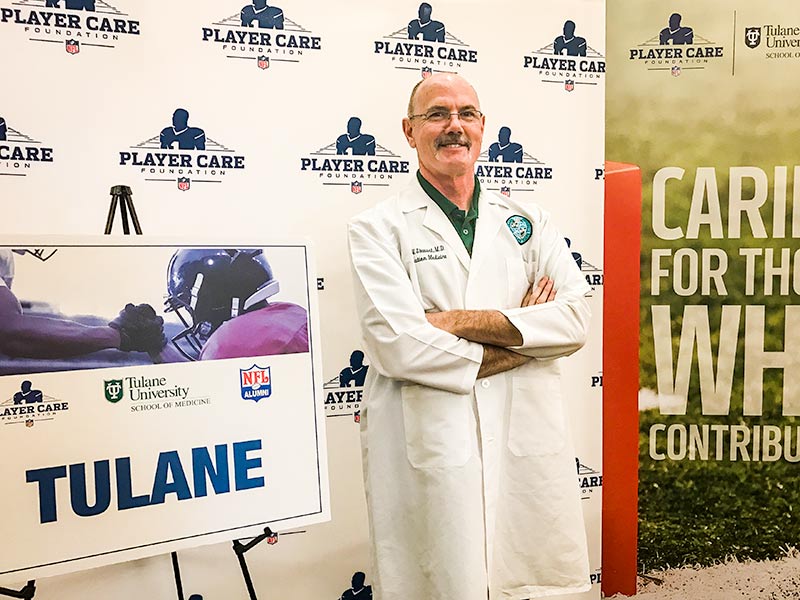 Tulane University physicians and staff are stepping up their health screening game for football’s biggest event of the year. They’ll be in Houston for Super Bowl LI conducting their largest health screening to date for retired NFL players as part of the NFL Player Care Foundation’s Healthy Body and Mind Screening program.

Approximately 175 former players have signed up for the event, which will take place Feb. 1-3 at the Houston Marriott in the heart of the city’s medical corridor. Tulane University School of Medicine conducts at least 10 health screenings annually across the country for retired players as the official screening partner for the NFL Player Care Foundation’s Healthy Body and Mind Screening program.

“Tulane is very active in helping care for former NFL players and I think that the word is getting out,” said Dr. Gregory Stewart, medical director of the NFL Player Care Foundation screening program at Tulane. “We knew coming into to Houston that there were a lot of former players in the area so we expanded the event to three days.”

This complimentary national program is open to all former NFL players and includes cardiovascular and prostate screenings and mental health resources and education. Tulane doctors screen around 500 players a year through the program, Stewart said.

“This is a very important program for these guys. We have found former players with significant heart disease and some with prostate cancer.  This program saves lives,” Stewart said.

The NFL Player Care Foundation hosts screenings across the country in NFL team cities and at regional events that attract large numbers of retired players such as Pro Football Hall of Fame Week and the NFL Players Association and NFL Alumni Annual Meetings. The screenings are offered as part of the NFL Player Care Foundation’s research programs, which help to advance public awareness and scientific understanding of health issues that affect former NFL players