Human impact on the Mississippi River region, planet is subject of Tulane conference 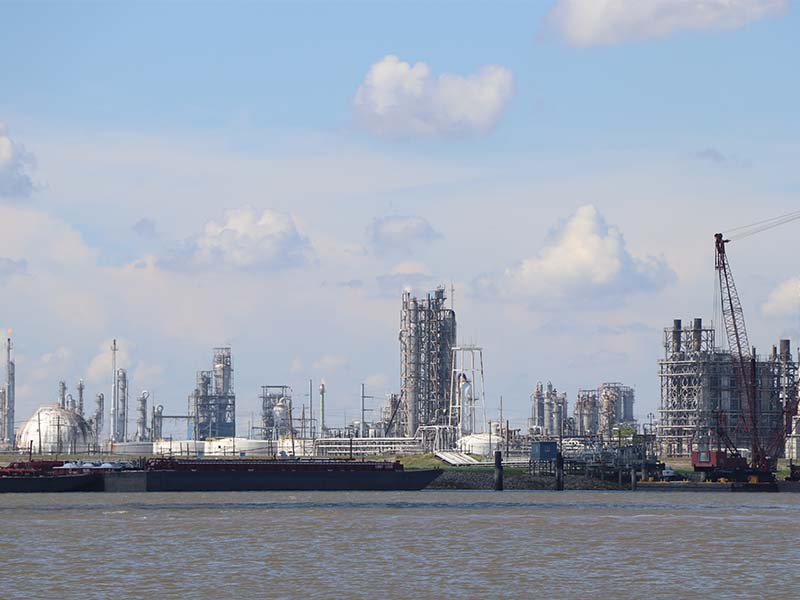 "Anthropocene River Campus: The Human Delta" is the culmination of a year-long study of the Mississippi River. (Photo by Gabriella Burns, courtesy of The Critical Visualization and Media Lab at Tulane)

The New Orleans Center for the Gulf South at Tulane University will host an international gathering Nov. 10-16 devoted to the human impact on and around the Mississippi River region basin and the planet.

"Anthropocene River Campus: The Human Delta" is the culmination of a year-long study of the Mississippi River related to such key themes as flow of commodities, river engineering and evolutionary stability, and claims to property and access.

The conference will bring 120 participants from local, upriver and international perspectives to Tulane for plenary talks, seminars and public programming such as film screenings and talks.

"Anthropocene River Campus: The Human Delta" welcomes a confluence of local, upstream and international perspectives for an exploration of our beloved and troubled river landscape."

Rebecca Snedeker, executive director of the New Orleans Center for the Gulf South at Tulane

Additional sponsors include the Tulane School of Liberal Arts and the Tulane ByWater Institute.

In addition to meetings among experts, public programs will take place all day Nov. 10 and Nov. 16, as well as each weekday evening.

These include “Anthropocene River” with presentations by event participants and a reception; “Universal Dream Denied: Environmental Risk in the Matanza-Riachuelo, Mississippi, and Yamuna River Basins,” featuring Ravi Agarwal, Christopher Oliver, and Debora Swistun; and “Down by the Riverside,” an evening of performances and interviews featuring Nick Spitzer of American Routes, Tom McDermott, the Doucet Brothers, Doc Hawley and Michael White with Topsy Chapman on Nov. 15. Times and dates of each event can be found here.

In addition, the public is invited to “Uprisings, Futures and Freedoms,” a conversation with artists Dread Scott, Kira Akerman and Denise Frazier following Slave Rebellion Reenactment, a major work of art about the 1811 slave revolt. The talk will take place Nov 12 at 7:30 p.m. The reenactment runs Nov. 8-9, retracing the route of the historic 1811 uprising upriver and ending with a celebration at Louis Armstrong Park.

The week concludes with the "Anthropocene River Campus Basecamp" at FORESTival Nov. 16 from 10 a.m. to 5 p.m. at A Studio in the Woods on the West Bank. The Basecamp will feature reflections of the campus seminars, as well as soil coring and river water testing activities, for this annual family-friendly celebration.

“The New Orleans Center for the Gulf South designs immersive, accelerated learning experiences that are grounded in our surroundings and relate the local to the global. Hosting the "Anthropocene River Campus" is our most ambitious and wondrous project to date,” said the center’s executive director, Rebecca Snedeker. Numerous Tulane faculty are participating, including environmental historian Andy Horowitz and environmental scientist Amy Lesen of the Tulane ByWater Institute.

The conference will also include panels with members of the Anthropocene Working Group, an international group of 30 scientists collaborating to conduct and compile stratigraphic research for the purpose of formalizing the term Anthropocene as a new geological era. The New Orleans Center for the Gulf South wil host a separate meeting for this group Nov 8-9 that media is invited to attend.

First coined in 2000, the term Anthropocene — or the Age of Humankind — is a concept that recognizes the present era in which human-generated forces have altered the earth’s surface, atmosphere and planetary patterns. Thirteen years later, the Haus der Kulturen der Welt and the Max Planck Institute for the History of Science founded The Anthropocene Project, a strategic effort to build an international network of scholars, scientists and artists who collaborate on new research that responds to the multifaceted challenges of the present era.

The two research institutes have studied sites around the world and most recently created "Mississippi. An Anthropocene River," focusing on the Mississippi River Basin as “an all-encompassing example of an immense space continually being reshaped by human activities.”