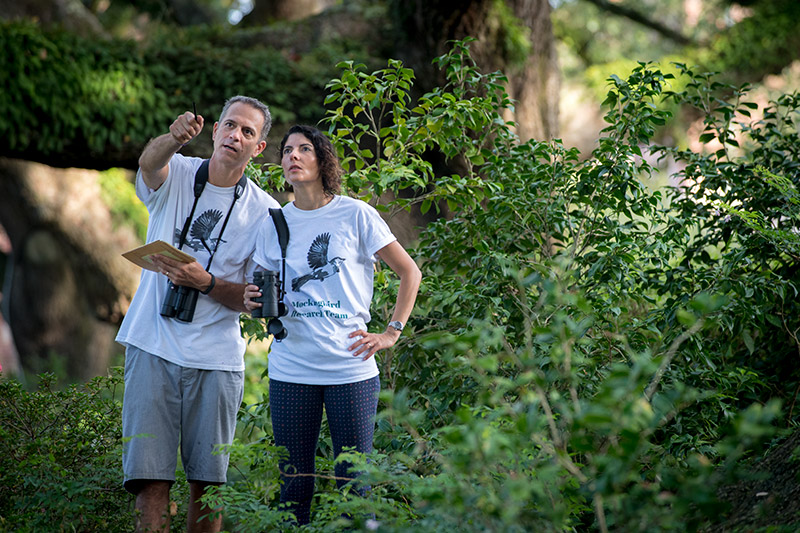 Husband and wife researchers Jordan Karubian, left, and Renata Ribeiro are studying the effects of lead in mockingbirds. (Photo by Paula Burch-Celentano)

Could mockingbirds, known for mimicking the sounds of other birds, also be mirroring the effects of lead exposure in humans?

Tulane University researchers have received a grant from the Morris Animal Foundation to continue their study on this and other possible results of lead exposure in wildlife.

The two-year $104,500 grant will allow the husband-wife team of Jordan Karubian and Renata Ribeiro, both professors in Tulane’s Department of Ecology & Evolutionary Biology, to build on previous work showing that lead levels in mockingbird adults, nestlings and eggs appear to correlate with the effects of environmental lead exposure in humans.

“Our main findings so far are that birds have lead levels in their bodies that mirror the levels in the environment."

“We have been comparing birds in areas of New Orleans that differ greatly in lead levels, collecting information about aspects of the song, how aggressive they are, reproductive success and body condition,” Ribeiro said.

“Our main findings so far are that birds have lead levels in their bodies that mirror the levels in the environment, just like the human residents of those neighborhoods,” Ribeiro said. She said those birds tend to be more aggressive than birds in low-lead neighborhoods.

“Among humans, heightened aggressiveness is a known effect of lead, which is a powerful neurotoxin, and these results suggest that this may also be true for birds,” Ribeiro said.

But because there could be other variables affecting how aggressive birds are, the team will expand its sampling throughout New Orleans and measure lead soil at a finer scale while taking into account factors such as habitat quality and density. If lead exposure does in fact lead to increases in aggression, it would shed light on an important and potentially widespread issue that could influence millions of urban animals, including pets.

In addition to Mielke, other collaborators include graduate student Stephanie McClelland and Myra Finkelstein, a researcher at the University of California at Santa Cruz. Several undergraduates are also assisting with the research.