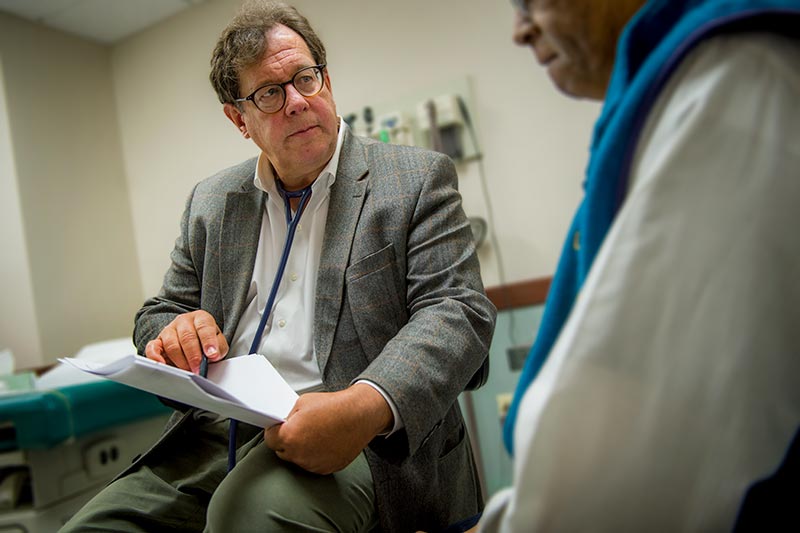 Tulane oncologist Dr. Oliver Sartor is co-author of the prostate cancer study and serves as the medical oncology chair of the national committee that ran the nearly two-decades long trial. (Photo by Paula Burch-Celentano)

“It more than cut the risk of prostate cancer death in half, which is quite substantial,” said Dr. Oliver Sartor, Tulane Cancer Center medical director and assistant dean of oncology at Tulane University School of Medicine. “For the first time, we now have a demonstration that hormonal therapy added to radiation can help save lives for men who have recurrent prostate cancer after surgery.  That’s a very big statement.”

The study was the lead article in the Feb. 2 issue of the prestigious journal. Sartor is a co-author and medical oncology chair of the national committee that ran the nearly two-decades long trial.

The study enrolled 760 patients who, after the removal of their prostate, experienced elevated prostate-specific antigen (PSA) levels indicating cancer recurrence. Men were randomly placed in two groups. One received antiandrogen drug bicalutamide at a dose of 150 mg for 24 months and six and a half weeks of radiation therapy. The other group received a placebo with the same radiation treatment.

Sartor said the study will likely help shift the standard of care for the approximately 30 percent of prostate cancer patients whose cancer returns.

“It’s an experimental proof that we now have that we’ve never had before,” he said. “I personally believe that people will use this data to encourage the use of hormonal therapy in combination with radiation as part of the standard of care for men with PSA recurrent disease. Further data is needed with newer hormonal regimens, as use of bicalutamide at this dose is not FDA approved.”