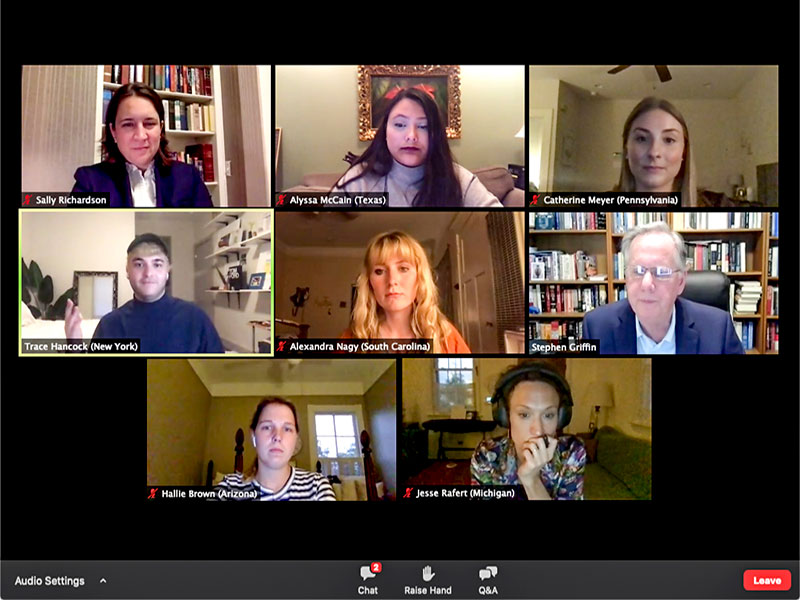 As students in Stephen Griffin’s Law of Democracy class at Tulane University School of Law, Alyssa McCain and Catherine Meyer immersed themselves in all things elections, from voter participation and campaign finance to racial discrimination and voting rights.

They studied the laws of individual states, regularly presenting the issues surrounding the election laws in those states.

When Griffin, the W.R. Irby Chair and Rutledge C. Clement Jr. Professor in Constitutional Law,  sought out volunteers for his post-election analysis webinar Wednesday night — the day after one of the most consequential presidential elections in modern history — McCain, Meyer and four others students were thrilled to participate.

“I really didn’t want to do this by myself,” Griffin said at the start of the webinar. "And it creates more interest to have students’ reactions. (We’re) not concerned with who wins…but that the election is held successfully and according to the law.”

"By being in this class, I felt like I was at the forefront of current issues. I found myself every day searching for new litigation about voting rights, voter suppression and election law.”


With the vote counts in several states still underway Thursday and legal challenges beginning to mount by the Trump campaign, students had no shortage of issues to address. Meyer discussed the vote-counting process in Pennsylvania, where the Supreme Court allowed the state three days after the election to count the votes. Student Hallie Brown talked about  the status of the vote count in Arizona, where the Trump campaign was considering a “stop the vote” challenge. McCain talked about the controversy surrounding curbside voting in Texas.

Although McCain is specializing in transactional law, she said Griffin’s class inspired her to continue studying elections and, upon graduation, to offer her voting rights expertise pro bono.

Meyer said the class taught her about the issues that continue to plague U.S. elections and undermine democracy.

“It has been incredibly interesting to take this class during the most important election of my lifetime,” Meyer said. “But it is disheartening to know that voter suppression still played a big role in the 2020 election.”

Laws of Democracy is an upper-level constitutional law course that allows students to explore a variety of topics related to the proper legal functioning of the country’s democratic system. In addition to voting rights and voter participation, students delved into reapportionment and redistricting, the rights of political parties, campaign finance, racial discrimination, racial redistricting and direct democracy.

Griffin said the class has been both fun and exhausting, what with keeping up with the  ever-changing status of election challenges in various states. “Teaching this class in the middle of a presidential election has been an incredibly energizing experience,” he said. “I hope students take away a sense of both the amazing accomplishments we’ve made in expanding American democracy for all our citizens but the dangers of retrogressing.