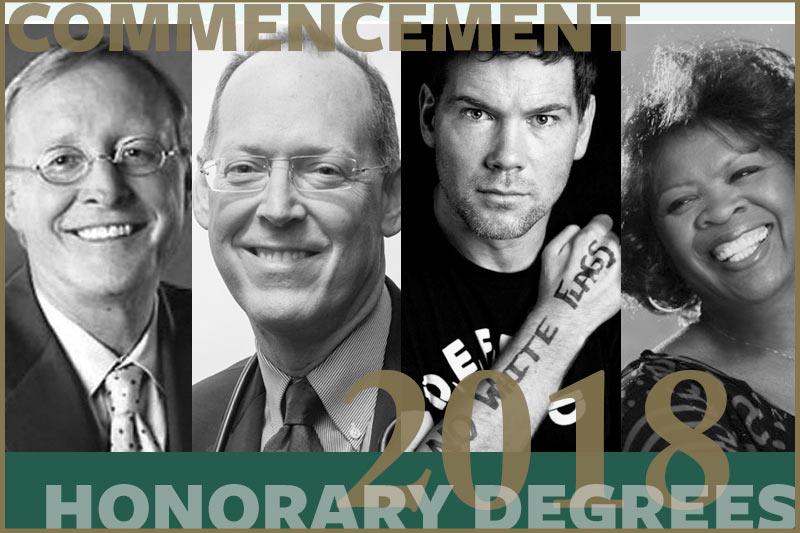 “Each of these individuals reflect the best of humanity through their achievements, their triumphs over adversity and their service to others,” Tulane President Mike Fitts said.

Steve Gleason, who earned an MBA from Tulane in 2011, played eight seasons in the NFL, but his professional career was defined by the punt he blocked during the first game the Saints played in the Superdome after Hurricane Katrina. The play and ensuing victory became a symbol of New Orleans’s post-Katrina recovery. In 2011 Gleason was diagnosed with amyotrophic lateral sclerosis (ALS), which robs its victims of the ability to move, speak and breath without assistance.  With his wife, Michel, he founded Team Gleason whose mission is to find a cure for ALS while showing patients that they can not only live with the disease but thrive. For his work as an advocate for people with ALS, Gleason was recently nominated to receive the Congressional Gold Medal, the highest civilian honor awarded by Congress.  Gleason will receive an honorary Doctor of Humane Letters from Tulane.

Irma Thomas is a Grammy award-winning member of the Blues Hall of Fame and a national musical legend. Known as “The Soul Queen of New Orleans,” she has recorded 21 albums and numerous singles, including the hits “It’s Raining” and “Wish Someone Would Care.” Thomas gives her time and energy to numerous civic causes, including the Irma Thomas Center for W.I.S.E. (Women in Search of Excellence) at Delgado Community College. Thomas will receive an honorary Doctor of Letters from Tulane.

“Each of these individuals reflect the best of humanity through their achievements, their triumphs over adversity and their service to others."

James H. Clark is a computer scientist and former Tulane student who co-founded Netscape, one of the internet’s first browsers, and two other innovative companies, that have changed the way society interacts with technology. These include Healtheon, an online medical records technology that merged with WebMD, now one of the world’s leaders in online health information. In addition, Clark is co-founder of Silicon Graphics Inc., one of the nation’s leading options for Hollywood visual effects and 3-D images. Clark will receive an honorary Doctor of Letters from Tulane.

Dr. Paul E. Farmer is a medical anthropologist and physician who has dedicated his life to improving health care for the world’s poorest populations. He is a founding director of Partners In Health (PIH), an international nonprofit organization that provides direct healthcare services on behalf of the sick and impoverished. Farmer is chair of the Department of Global Health and Social Medicine at Harvard Medical School and has written numerous books on health, human rights and the consequences of social inequality. Farmer will receive an honorary Doctor of Humane Letters from Tulane.