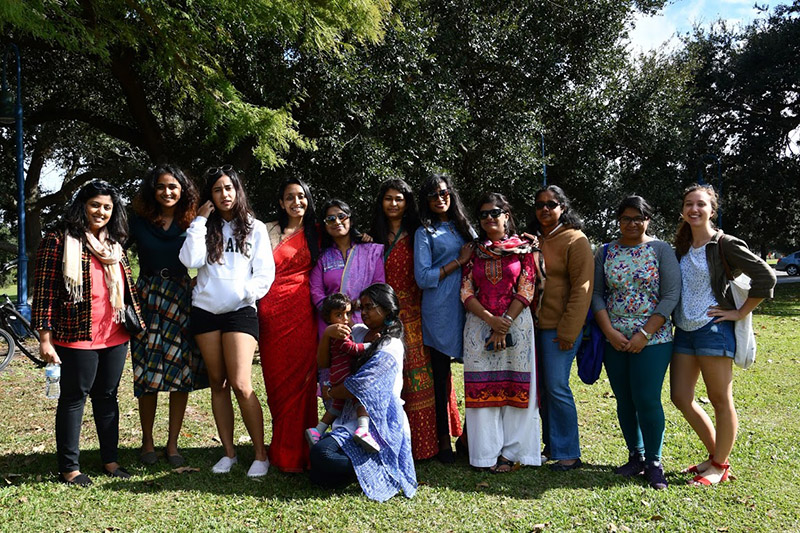 New Orleans is well over 9,000 miles from Sri Lanka, so when Dilanka Vidyani learned that she had been accepted into the PhD chemistry program at at Tulane University, she was understandably nervous and scared about being so far away from home.

“We are so attached to our families that it’s a big shock for us to leave,” she said. “I was with my parents the entire time until I got here two years ago.”

As one of the leaders of the newly formed Indian Subcontinent Graduate Student Association of Tulane University, she and fellow South Asian graduate student Bhavita Kumari want female graduate students from India, Pakistan and other South Asian countries to know that they are not alone.

“We want to give the message to our community that no woman is alone when they are in need.”

The group’s activities include celebrating International Women's Day, a potluck lunch at The Fly and a South Asia New Year’s celebration. It is also launching a social media campaign highlighting the achievements of South Asian women, including journalist Hasina Jalal of Afghanistan, an advocate for women’s rights; Kalpana Chawla, an astronaut from India; and Sharmeen Obaid Chinoy, a film director from Pakistan.

“We want to highlight all the wonderful ladies from South Asia and discuss the various challenges we face as women,” said Kumari, a Fulbright Scholar studying family planning at the Tulane School of Public Health and Tropical Medicine. “We want to give the message to our community that no woman is alone when they are in need.”

Dalinka wishes there would have been such a group when she first arrived at Tulane. She knew no one and lived alone in an Uptown apartment with nothing more than an air mattress.

“I was isolated in an apartment for the very first time in my life, and I just wanted to go,” she said.  “I was like, ‘I can’t do this.’ In my mind, I was roaming around with my friends and family in Sri Lanka.”

At the recommendation of her best friend, a graduate student at Kansas State University, she started hanging out at coffee shops and making new friends. “She said, ‘Don’t give up. You’ve got a full scholarship.’ ”

Two years into her studies, she still misses her family but feels right at home at Tulane and New Orleans. She is studying anti-cancer drug development and hopes to find a job in the United States when she completes her PhD in three years.

In the meantime, she said, she will do everything she can to make newcomers from South Asia feel welcome and secure. “We want to let them know that they are not alone.”