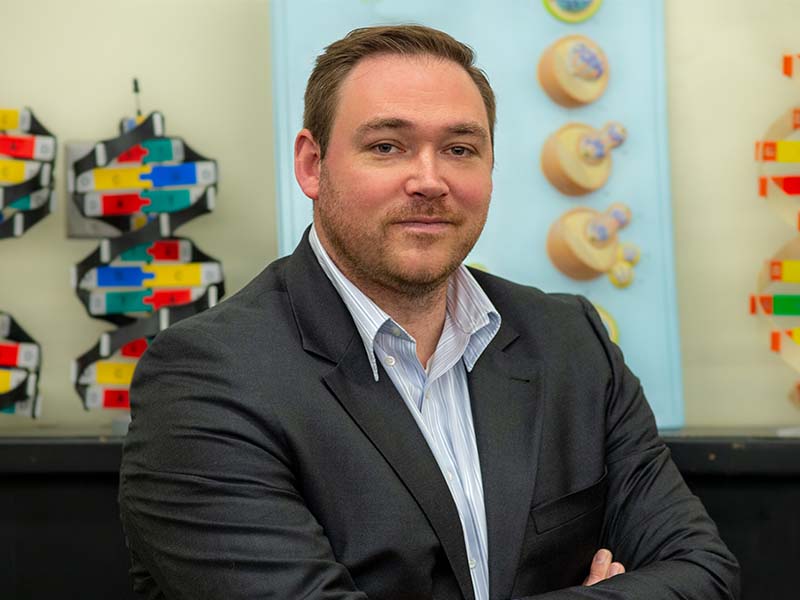 Tulane University assistant professor Damian Murray collaborated on a research project with a group from UCLA to study how falling in love influences the immune system in women. (Photo by Sally Asher)

As Valentine’s Day arrives, there’s no doubt love is once again in the air during this annual holiday that dates as far back as the 14th century. So, what exactly does it feel like to fall in love and how does love affect us as humans? Many scientists have proven falling in love has its physical benefits on both men and women, but can falling in love influence the immune system in women?

Falling in love is one of the most essential and psychologically potent events in human life.  However, the physical consequences of new romantic love remain poorly understood.  In a study that was three-years in the making, a group of researchers from Tulane University and the University of California, Los Angeles (UCLA) combined efforts to study how falling in love is associated with changes in immune-related gene expression.

Damian Murray, an assistant professor in Tulane’s School of Science and Engineering, along with UCLA professors Martie Haselton and Steven Cole and recent graduate Melissa Fales, collaborated on a research project and their newly-accepted paper titled, Falling in love is associated with immune system gene regulation, is featured in this month’s edition of Psychoneuroendocrinology, which publishes interdisciplinary articles dealing within the interrelated disciplines of psychology, neurobiology, endocrinology and immunology.

“What we found was that women who fell in love had increased activity of genes involved in antiviral defenses, compared to when they began the study."

“What we found was that women who fell in love had increased activity of genes involved in antiviral defenses, compared to when they began the study,” Murray said.  “No similar change was observed in women who did not fall in love. This could reflect a kind of a proactive response to anticipating future intimate contact, given that most viruses are spread via close physical contact.  However, this increased activity of antiviral genes is also consistent with the biological preparation of the body for pregnancy. From this women-only sample, both of these interpretations remain possible.”

“A few years ago, Martie Haselton and I attended a talk by Steven Cole on the epigenetic and health consequences of being chronically lonely. Chronic inflammation is bad for health, and loneliness is one of the biggest predictors of mortality.  Martie and I wondered if there could be a flipside to this ‘lonely’ epigenetics profile and we arrived at love.  Is new romantic love the actual antithesis of loneliness?  The answer depends on whom you ask, but we wanted to investigate whether new romantic love in new romantic relationships was associated with favorable health and a favorable immune-related epigenetic profile,” Murray said.

The 12-month paid study took place on the UCLA campus and included both undergraduate and graduate students and was centered on women only. A total of 47 women completed the research, which included blood draws and bi-weekly questionnaires. Depending upon their relationship timeline, women participated in the study for up to 24 months.

To be eligible to participate in the study, only healthy women who were not taking drugs and were in a new romantic relationship were considered.  A new relationship was defined as seeing someone less than a month, but the participants had to report that they were not yet in love with their partners.

“One of the biggest challenges was figuring out how we could access this fairly narrow population and be in the best position to make statistical inferences. We arrived at a two-year longitudinal study that would assess within-person change in gene expression over time.

We put out flyers and women called or emailed us and were pre-screened. It was a challenge to recruit for this study. Over half the women we pre-screened had been seeing someone romantically for less than a month and reported already being in love with them, but by study completion we had a sample of 47 women who had completed at least two blood draws,” Murray said.

Upon completion, Murray circled back to the original thought that sparked the study and stated that new romantic love is probably not the antithesis of loneliness, subjectively speaking. There were no significant changes in self-reported loneliness or depressive symptoms between when women started the study and when they reported falling in love.

Going forward, Murray and his group have submitted a follow-up grant proposal to look at the longer-term epigenetic and health implications of love in a less acute way by analyzing people not just when they are newly in love, but also when they have been securely in love for an extended period. The follow-up study will feature both women and men.

“Ultimately, I think what we’d like to accomplish is to be able to map the physiological changes that accompany the initiation and progression of human romantic relationships and see how those have implications for both immediate and long-term health and how the epigenetic implications of love may facilitate pregnancy and reproduction,” Murray said.