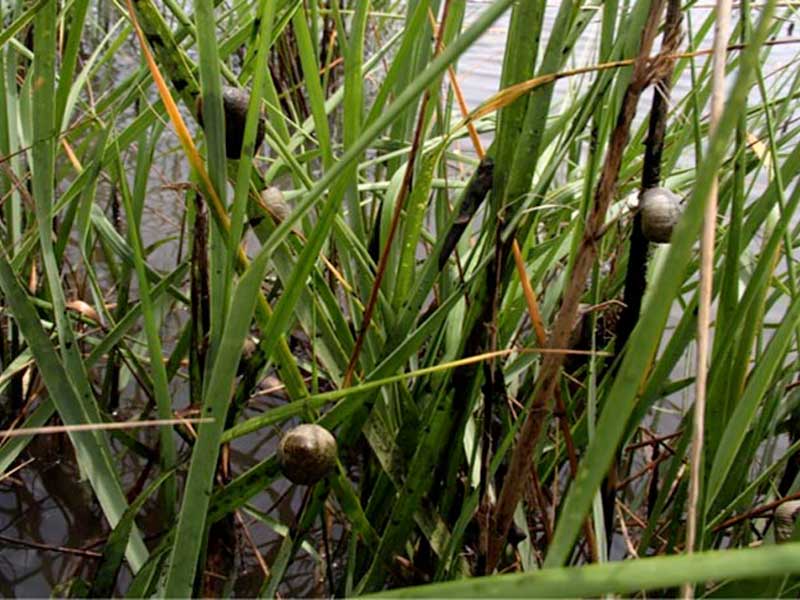 Snails on salt marsh cordgrass that has been oiled. Photo by Jordan Hoffmann

In this study published in PLOS ONE, Van Bael and her colleagues, postdoctoral researcher Demetra Kandalepas and Michael Blum, associate professor of Ecology and Evolutionary Biology, focused on the little-known communities of fungi and bacteria living symbiotically within these plants.

Plants have been used for pollution cleanup for years and will be useful in the future, according to Van Bael.

“You go to a polluted site and find the best plants to grow there to help clean up pollutants. Our goal is to figure out the best bacteria to partner with plants to enable them to increase the speed of oil remediation,” says Van Bael.

“These kinds of symbioses evolved over millions of years, and they were probably important for plants even to make it onto land,” she says. “Endophytes, or bacteria and fungi living within plant tissues, have growth-promoting properties, or they can produce hormones or metabolites that help plants deal with stresses like drought or salinity.”

Research has shown that endophyte communities change when plants experience environmental stress, and this may affect the plants’ ability to survive. The Tulane team collected plants from sites that had been oiled and from nearby areas without oil.

“We found a big shift in the endophyte community in plants that grew up with oil,” says Van Bael. “The fungi normally found in leaves were nearly gone, and in the roots there was a shift toward more species of bacteria known for breaking down oil.”