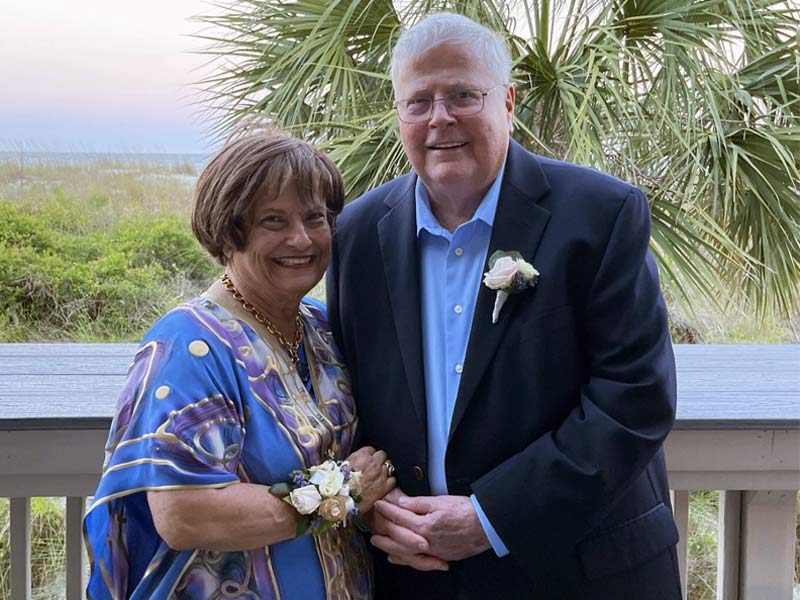 The Priddy Family Foundation, led by Robert and Kikie Priddy, is donating $1 million to the Tulane Center for Brain Health to help treat military veterans. (Photo courtesy of the Priddy family)

With an emphasis on music therapy, the Priddy Family Brain Health Fund will support the TUCBH’s delivery of intensive outpatient care at Tulane Medical Center. The center’s diagnostic and treatment services blend conventional medicine such as neurology and pharmacology with complementary and alternative options that include yoga, canine therapy, and art and music therapies.

An established health profession, music therapy is used to address a patient’s physical, emotional, cognitive and social needs and to provide a channel for communication for those who find verbal expression difficult. Treatments can include creating, singing, moving to and listening to music, and learning to play an instrument.

“We are grateful and honored that, with the Priddys’ continued support, we will be able to take a leading role in helping our veterans heal.”

Expanding music therapy at the TUCBH was especially important to the Priddys in making this gift, said Tulane alumnus Robert Priddy (’69), who has seen firsthand the power of music to improve the well-being of people with Alzheimer’s disease.

“My family and I have watched Alzheimer’s patients completely come alive during music therapy, even when delivered over Zoom,” Priddy said. “We’ve all been just blown away by the impact on these people that the music has. They might not be able to remember what their kids’ names are, but if you play a song from the ’50s and ’60s, they know the words, their feet start moving, and they’re swaying to the music.”

“A woman had not spoken a word in three years, and she was singing right along with them,” recalled his wife, Kikie Priddy. “Her family just could not believe it, and you think, ‘This is really working for people.’ We’re excited to see how Tulane’s Center for Brain Health will use music therapy to improve the lives of afflicted veterans who need help.”

Tulane President Michael Fitts noted that the Priddy family’s latest gift is both “generous and personal.”

“This gift shows the thoughtful, innovative and personal approach the Priddys take in creating and supporting efforts designed to have a life-changing and life-saving impact on the many who are battling wounds and ailments sometimes overlooked or forgotten by society,” Fitts said. “We are grateful and honored that, with the Priddys’ continued support, we will be able to take a leading role in helping our veterans heal.”

Traumatic brain injuries are all too common among service members, with nearly 414,000 cases diagnosed between 2000 and 2019, according to the Defense and Veterans Brain Injury Center. That grim statistic highlights the importance of the Priddy family’s donation, said Dr. Gregory Stewart, the W. Kennon McWilliams Professor of Sports Medicine in Orthopaedics and co-founder and co-director for the Tulane Center for Sport, of which the TUCBH is a part.

“We’re very grateful for the Priddys’ gift,” Stewart said. “This donation will allow us to build a robust integrative medicine component to our intensive outpatient program. By offering a range of nontraditional therapies — including yoga, art, music and canine — we’re able to take a holistic, patient-focused approach to treating these warriors with invisible wounds. This gift supports programs that enable our veterans to explore underlying issues and create pathways for functioning at the highest levels in all areas of their lives.”

The TUCBH offers prospective patients an initial three-day evaluation, during which they meet with doctors and other specialists to assess their needs and develop an intensive outpatient treatment program. The center expects to evaluate about 150 to 200 veterans each year.

The services offered during those three days could otherwise take as long as 17 to 18 months for veterans to receive through traditional healthcare channels.

While visiting the center, veterans will stay at The Jung Hotel near Tulane Medical Center. The hotel is also being utilized for yoga and other therapies and services.

“This is the welcome I’ve been waiting for since I came back from Vietnam — after 50 years,” one grateful veteran said. “The staff at the TUCBH sat me down and for three days went over the physical and mental injuries that have been affecting my life for decades.”

The Priddys’ gift will enhance the center’s capabilities even further, coming on the heels of its recently announced partnership with the Gary Sinise Foundation Avalon Network.

The Priddy Family Foundation includes Robert and Kikie Priddy; their daughter, Shannon Priddy Acks, and her husband, Michael Acks; and their son, Christopher Priddy. The foundation has a particular interest in advancing brain science and finding cures and treatments for neurodegenerative diseases. In 2018 it gave $1 million to the Tulane Brain Institute for the Priddy Family Spark Research Endowed Fund, created to provide competitive awards to faculty for early-stage research.

Robert Priddy graduated from Tulane in 1969 with a bachelor’s degree in economics. After a successful career in aviation and private equity, he remains an active private investor and sits on the boards of many of the companies in his portfolio. In addition, he serves on the Board of Advisors for Tulane’s Cowen Institute and is a member of the National World War II Museum’s Board of Trustees. The Priddys live in New Orleans.

Shannon Priddy Acks also sits on the Cowen Institute’s advisory board. She and her husband reside in Charlotte, North Carolina, and have three children. Their son Austin is a student at Tulane School of Medicine. Christopher Priddy and his wife, Rebecca, have four children and live in Dallas.