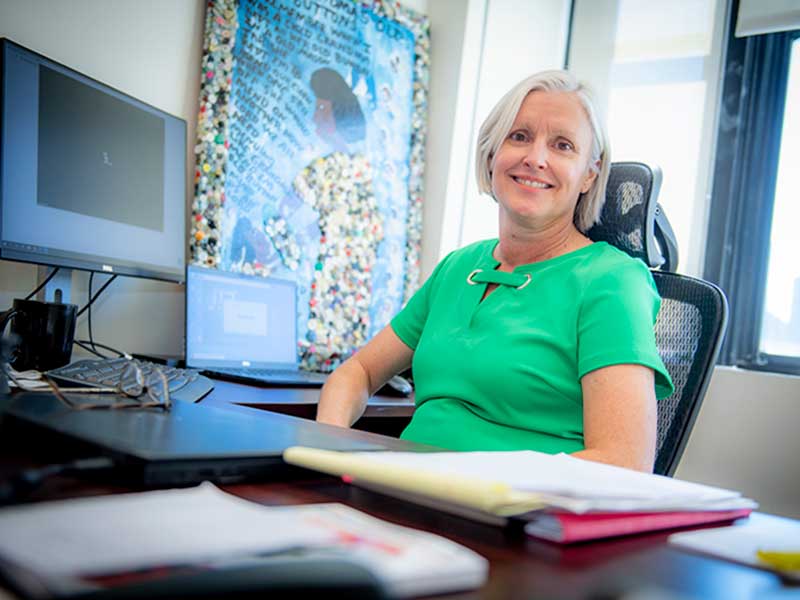 Susan Davies joined the Tulane School of Social Work as associate dean of research after nearly 30 years at the University of Alabama at Birmingham. (Photo by Paula Burch-Celentano)

Susan Davies isn’t a social worker. Yet the new associate dean of research for the Tulane University School of Social Work — whose background is in public health — could not be a bigger champion of the importance of social work research.

“I’m a real fan of social work,” Davies said. “I’m a behavioral scientist trained in public health, but I have always thought of myself as a social worker wanna-be.”

As such, she sees her new role as one in which she brings the two entities together to study homelessness, suicide, teenage pregnancy, maternal mental health and other issues affecting marginalized communities.

“I have such an incredible group of scholars with expertise in all the areas that are critical to solving our most pressing problems today."

Susan Davies, associate dean of research at the Tulane School of Social Work

Davies stepped into her position Oct. 1 after nearly 30 years at the University of Alabama at Birmingham. At UAB, she directed the CDC-funded Prevention Research Center, which focuses on reducing health risks among underserved populations in Alabama and plays a lead role in the development of community-based participatory research. In addition, she had appointments in seven other centers, including the Center for AIDS Research, Minority Health Research Center and the Center for Clinical and Translational Sciences.

Much of her research has focused on reducing HIV, sexually transmitted infections and unintended pregnancy among adolescents, and she plans to bring her work to Tulane. Her studies show that there is a right way and wrong way to talk to teens about pregnancy prevention.

“You start way before the teenage years, where you don’t even need talk about condoms; you talk about future goals and aspirations and staying connected to school and finding things that you’re good at,” she said, adding that having positive future expectations is a powerful risk deterrent.

Davies also studies maternal mental health, especially among those living in poverty. “Moms are so burdened down and overwhelmed and judged that it’s hard to ask for help, but they are our best health educators, for better or worse. If we can arm them with skills and get them connected with resources, their jobs will be easier.”

Davies had been at UAB for nearly 30 years when Tulane recruited her for the associate dean of research at the School of Social Work. She wasn’t looking to move, but she was so impressed with Tulane’s commitment to advance research that makes a difference — not just at the School of Social Work but across campus — that she and her husband decided to make the move. That her children were grown and out of the house made the decision much easier, she said.

“I have such an incredible group of scholars with expertise in all the areas that are critical to solving our most pressing problems today – from healing personal or collective trauma, increasing resilience in the face of pandemics and other disasters, to addressing racial and socioeconomic inequities,” Davies said of the School of Social Work faculty. “I’m hoping to work with all faculty but especially the newer faculty to help them find their niche. It will be a fun role to have.”