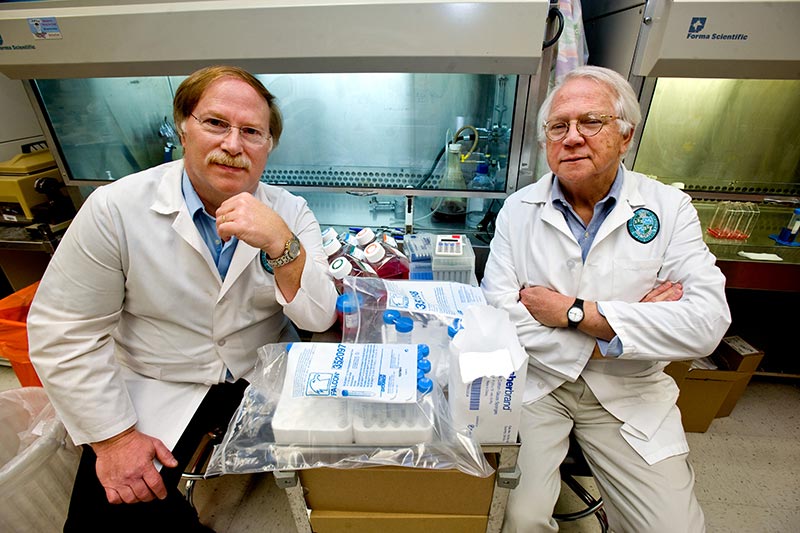 Tulane University School of Medicine virologists and study co-authors Robert Garry (left) and Dr. James Robinson are part of a Lassa virus research team whose discovery made the cover of the latest issue of Science, a leading research journal. (Photo by Paula Burch-Celentano)

A team of scientists, including virologists from Tulane University, have for the first time mapped the molecular structure of an elusive surface protein on the Lassa virus that allows the pathogen to infect human cells. The research identifies a key antibody target that could serve as a blueprint for developing a vaccine or antibody-based drug against deadly Lassa fever.

The breakthrough, more than a decade in the making, is featured on the cover of the June 2 issue of Science. It is the first time researchers have exposed a key portion of the viral surface structure, called the surface glycoprotein, for any member of the arenavirus family, which includes several viruses that cause deadly hemorrhagic fevers worldwide.

The research was led by Kathryn Hastie and Erica Ollmann Saphire of the Scripps Research Institute. Tulane University School of Medicine virologists and study co-authors Robert Garry and Dr. James Robinson have been researching Lassa fever with partners in West Africa for more than a decade. Tulane scientists collected blood samples from survivors in Sierra Leone and sent them back to New Orleans, where Robinson’s lab worked to identify and clone more than 100 different antibodies used in the research.

“The publication of this paper, long in the making, is a tribute to the persistence and perseverance of a wonderful team of collaborating investigators.”

Scientists hadn’t been able to successfully solve the structure of Lassa virus because the glycoprotein falls apart under conditions normally used to create a crystal model. Scripps researchers were able to engineer a more stable version of the glycoprotein. This was used to identify a key binding site for antibodies from survivors’ blood samples.

Researchers detailed how subunits of the glycoprotein work together to infect a cell. They also discovered how three pairs of proteins, called a trimer, come together to form a tripod-like structure. Roughly 90 percent of the effective antibodies target that trimer nexus, locking the subunits together to prevent them from enabling Lassa virus to enter a host cell.

“The trimer structure of the Lassa virus glycoprotein will have a lasting impact on the field of viral hemorrhagic fever research,” Garry said. “It's gratifying to see a truly collaborative study come to fruition after such a long effort. It would not have been possible without the great teamwork."

The research team also included investigators from the Albert Einstein College of Medicine and Zalgen Labs. 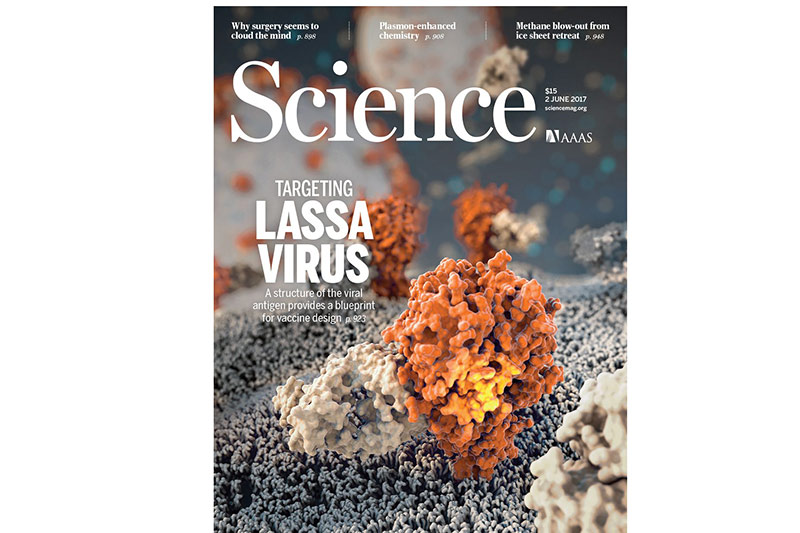