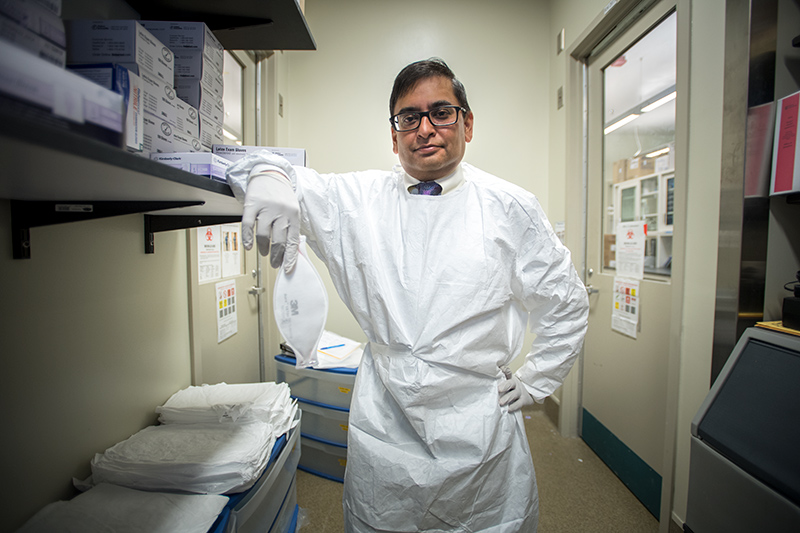 Researchers in the Tulane National Primate Research Center want to know more about why patients with HIV are highly susceptible to contracting tuberculosis (TB). Using two new grants, totaling $8.4 million from the National Institute of Allergy and Infectious Diseases, the Tulane team lead by Deepak Kaushal hopes to figure out how the bacterium that causes TB invades T-cells depleted by HIV. The researchers will also study if B-cells can be a source of protection against tuberculosis for patients battling HIV.

The risk of developing tuberculosis is up to 31 times greater in people living with HIV according to the World Health Organization. Most people infected with Mycobacterium tuberculosis (Mtb) have a latent form of the disease, but it develops into active tuberculosis when a patient is infected with HIV.

Kaushal’s team hypothesizes that co-infection with HIV depletes and/or impairs the functions of CD4 T cells that recognize certain proteins produced by Mtb. Tulane researchers think that drives reactivation of latent tuberculosis and that antiretroviral therapy (ART) may only partially restore the functions of both types of T cells. The research will look at the impact of antiretroviral therapy as well as preventive therapy directed at Mtb.

The second grant will study if lung B-cells play a role in protecting from tuberculosis and assess if whole-cell vaccines that have shown promise in clinical trials can work for patients who have both TB and HIV. This has been a controversial area of research in the field but Kaushal’s preliminary work shows that this may indeed be the case.

“We haven’t been able to make vaccines that are effective against this massive killer, which leads to about two million deaths every year,” Kaushal says. “Part of the problem was that it had been difficult to model TB in animals in a way that faithfully represents what happens in the human lung. Now we are at that stage. Identifying which bacterial proteins against which protective responses can be mounted will allow us to develop both vaccines and additive therapeutic strategies against this disease.”