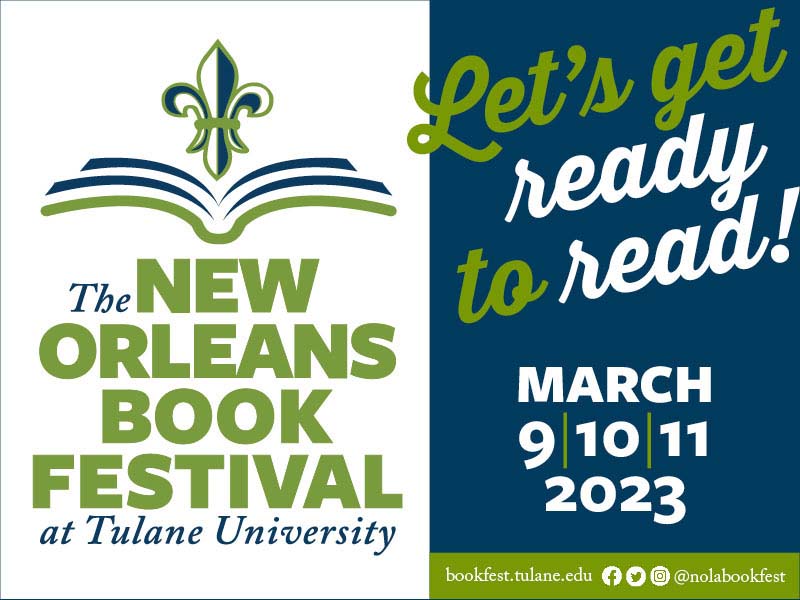 The second-annual New Orleans Book Festival at Tulane University will once again feature some of the nation’s favorite bestselling and critically acclaimed authors and will focus on children’s literacy with Family Day at the Festival.

The 2023 New Orleans Book Festival at Tulane University announced its much-anticipated lineup for the second-annual literary festival, naming over 100 bestselling and critically acclaimed authors slated to appear on Tulane’s Uptown campus, March 9-11, 2023. The three-day celebration of national, regional and local authors is free and open to the public, thanks to the generosity of many individual and corporate sponsors. A full list can be found here.

This is only the initial announcement of authors. The 2023 book festival’s lineup of writers is expected to grow to more than 130 and will once again feature a whirlwind of author sessions, book signings, interviews and other special events, including a family day and free book giveaway for kids.

"This year’s festival promises to be an even greater celebration of books, the authors who create them and readers – both current and future – who cherish them."

“Last year’s inaugural Book Festival started a new literary tradition in a city that has given the world so many iconic authors and memorable characters,” Tulane University President Michael A. Fitts said. “This year’s festival promises to be an even greater celebration of books, the authors who create them and readers– both current and future– who cherish them. The New Orleans Book Festival at Tulane is a true Mardi Gras for the mind.”

“We are thrilled to announce an outstanding collection of authors and expert panelists for our second-annual New Orleans Book Festival at Tulane University,” Landrieu said. “Our festival will once again offer subjects and conversations to readers of all ages and backgrounds— from our keynote speakers to our family day— we have something for everyone in our community. We were blown away by the response to our inaugural festival this past March. We look forward to hosting an amazing group of authors and the thousands of literary lovers in New Orleans and our surrounding communities.”

“It’s an absolute honor and privilege to host such a diverse and accomplished group of local, regional and national best-selling authors at our 2023 book festival,” Isaacson said. “We look forward to the many meaningful conversations, joyful moments and wonderful connections with book enthusiasts of all ages. We invite devoted book lovers to come and experience a three-day celebration of literacy and culture.”

The Crescent City’s newest literary event will include panel discussions, moderated conversations, keynote lectures, book fairs, family programming and workshops. Each day will feature at least one major plenary session with a leading author. The event will also provide a forum for media outlets, authors and readers to network and collaborate in one of the world’s most vibrant and culturally diverse cities.

Family Day at the Festival will take place on Saturday, March 11, in the Avron B. Fogelman Arena in the Devlin Fieldhouse. The day will focus on literacy advancement with readings and special literary-themed activities for the children of the greater New Orleans area and their families. The festival will engage with teachers, school organizations and literacy, child advocacy and city partners to encourage attendance and participation. The book festival will also partner with the Scholastic Corporation for family day.

The inaugural New Orleans Book Festival at Tulane University debuted last spring and included coverage from NBC’s ‘Today with Hoda & Jenna’, C-Span's Book TV covered two days of author discussions and the event featured three days of lively, in-depth and extraordinary conversations with some of the nation’s most beloved bestsellers.