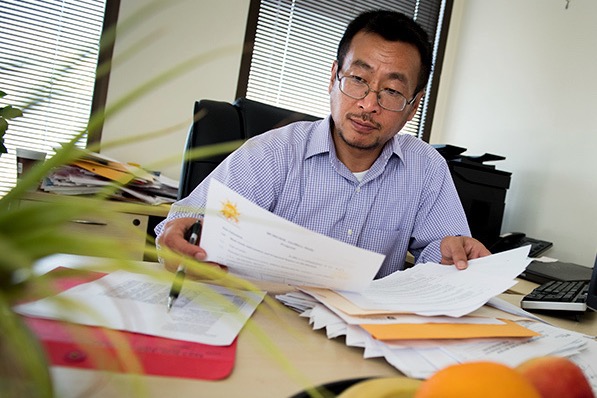 Research by Dr. Lu Qi, a professor of epidemiology at Tulane University School of Public Health and Tropical Medicine, has found that adding salt to food less frequently can reduce risk of heart disease. (Photo by Paula Burch-Celentano)

Adding less salt to food can reduce the risk of heart disease, heart failure and ischemic heart disease, according to a new study, published in the Journal of the American College of Cardiology.

Notably, adding less salt to food also improved the heart health of those already following a DASH-style diet, a diet designed to lower high blood pressure by limiting the intake of saturated fats, sugars and sodium.

“Overall, we found that people who don’t shake on a little additional salt to their foods very often had a much lower risk of heart disease events, regardless of lifestyle factors and pre-existing disease,” said Dr. Lu Qi, HCA Regents Distinguished Chair and professor at the Tulane University School of Public Health and Tropical Medicine. “We also found that when patients combine a DASH diet with a low frequency of adding salt, they had the lowest heart disease risk. This is meaningful as reducing additional salt to food, not removing salt entirely, is an incredibly modifiable risk factor that we can hopefully encourage our patients to make without much sacrifice.”

There’s substantial evidence linking high sodium intake to high blood pressure, a major risk factor for cardiovascular disease. However, epidemiological studies investigating this link have produced conflicting results due to a lack of practical methods for assessing long-term dietary sodium intake. Recent studies suggest that the frequency at which an individual adds salt to their foods could be used to predict their individual sodium intake over time.

The study evaluated whether the frequency of adding salt to foods was linked with heart disease risk in more than 176,000 participants from the UK Biobank.

The association between adding salt to food and heart diseases was stronger in participants of lower socioeconomic status and smokers.