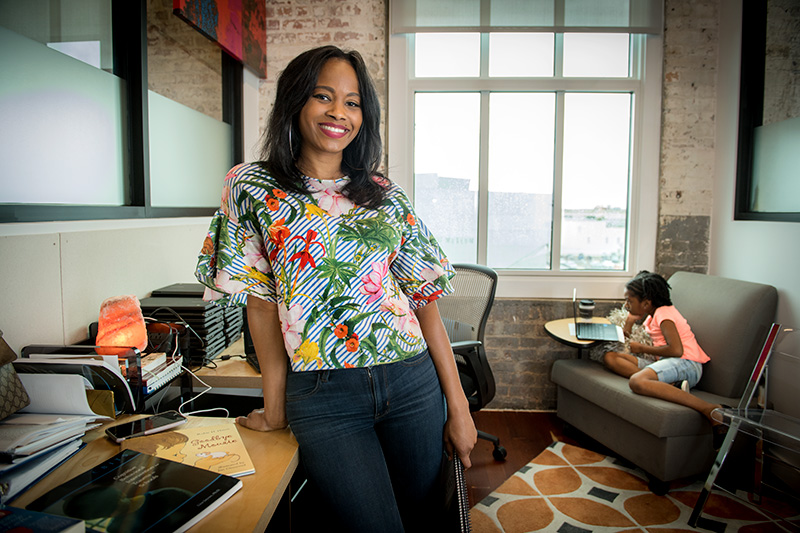 Danielle Wright is using her DSW from the Tulane School of Social Work to help vulnerable New Orleans children. (Photo by Paula Burch-Celentano)

Danielle Wright traces her interest in social work to her summers as a camp counselor for NORD, the New Orleans Recreational Department. She was assigned to work with 4-year-olds, and two children in particular gave her pause.

One had been exposed to drugs in utero and was extremely hyperactive, while another had eczema, causing him to cry and scratch incessantly. Even as a teen, Wright could tell that these children needed serious help.

“Those experiences really piqued my interest, and here I am 20 years later still talking about them,” she said.

“The (social work) professors were dynamic. They pushed us to push ourselves.”

Today, Wright holds a DSW (Doctorate of Social Work) from the Tulane University School of Social Work along with master’s degrees in public health and social work from Tulane. She is the director of a nonprofit called Navigate Nola, which offers a wide range of mental health services to vulnerable children and teens.

With an $800,000 grant from the Kellogg Foundation, she launched SEW (Social & Emotional Wellness) NOLA, a school-based program that seeks to address disparities among low-income minority youth in New Orleans. Through teaching such skills as social awareness, responsible decision-making and relationship-building, the program aims to improve school behavior as well as address disparities in academic achievement.

“It's called emotional IQ,” said Wright. “It’s learnable, buildable and teachable. It’s what sets us apart as far as success later in life.”

Wright is proud of the work that she and her staff have done and largely credits the Tulane School of Social Work with providing her with the tools to address the “toxic stress” that so many New Orleans youth, from babies to teens, are experiencing.

“The professors were dynamic,” she said. “They pushed us to push ourselves.”

“They have such high standards of excellence and very high expectations,” she said. “They pushed my critical-thinking skills. The way I was challenged, I just never thought I would have that level of confidence.”