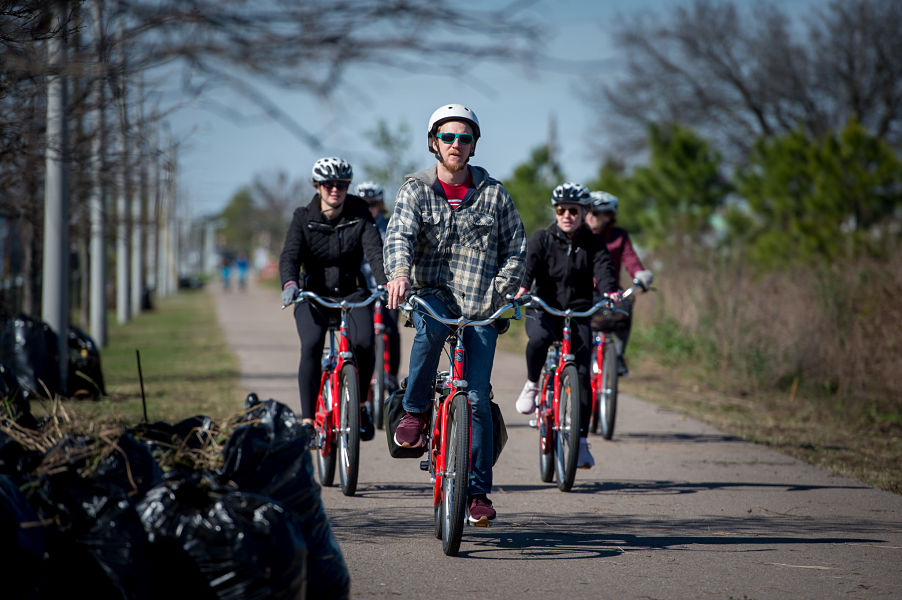 Bicyclists ride along the Lafitte Greenway. (Picture by Paula Burch-Celentano)

Lights at intersections where the Lafitte Greenway meets New Orleans’ busy streets are meant to make drivers stop for cyclists and pedestrians. That’s the intention, at least. New research from Tulane University, however, finds drivers are more likely to hit the gas instead of the brakes when they see those lights flashing.

Students, trained as research assistants, and led by epidemiologist Jeanette Gustat, an associate professor at Tulane School of Public Health and Tropical Medicine, observed nine different intersections along the Greenway. They spent more than two hours at each, and recorded 861 cyclists, 318 pedestrians and 923 cars on the Greenway or crossing it during the course of two days.

“Drivers in New Orleans need to be made aware of what those flashing lights mean and what their responsibility is,” Gustat says. “There’s also mixed research about the effectiveness of that type of signal. There are more prominent lights that could be used.”

The researchers also found Lafitte Greenway users aren’t consistent about activating the crossing signals. The students performing the observations found only 14% of cyclists and 23% of pedestrians triggered the lights before attempting to cross.

“Greenway users told us they don’t think these signals work to make drivers stop,” says Chris Anderson, a doctoral candidate in the Department of Epidemiology, who helped conduct the study.

Anderson says more consistent signal use, along with more education for drivers and cyclists could help improve safety at the Greenway intersections.