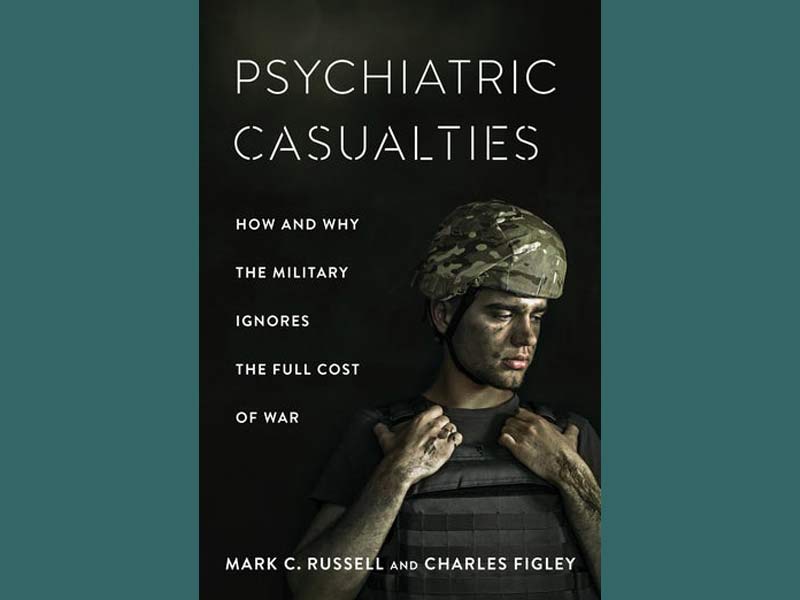 Charles Figley, a Tulane University professor of social work, teamed up with trauma expert and military veteran Mark Russell on a book about the state of mental health care in the military.

Charles Figley, director of the Tulane Traumatology Institute at Tulane University, knows all too well the psychological toll that serving in the military can take on troops. He served a tour of duty in the Vietnam War as a member of the U.S. Marine Corps. And later, as a noted professor at Purdue University, he had a front-row seat to the failures of military mental health in the United States.

That was in the 1960s, and little has changed, said Figley, co-author of the newly published book Psychiatric Casualties: How and Why the Military Ignores the Full Cost of War (Columbia University Press).

“Military mental health is mismanaged, disorganized and often ignored and misunderstood,” said Figley, who also holds the title of Paul Henry Kurzweg Chair in Disaster Mental Health at the Tulane School of Social Work.  The prevalence of conditions such as post–traumatic stress disorder is often underestimated, with the military dismissing or concealing the significance and extent of the mental health crisis.

“We are eager to reach military members and families as well as military veterans to join our cause and help improve the situation significantly."

In the book, Figley teams up with Mark Russell, a fellow trauma expert and military veteran to explore such topics as extensive waiting lists for help, organizational scandals, spikes in veteran suicide, over-prescription of narcotics, shortages of mental health professionals and inadequate treatment.

“We are eager to reach military members and families as well as military veterans to join our cause and help improve the situation significantly,” Figley said.

So far, he said the response to the book has been positive. “Among other good signs: A documentary has emerged and will be released in September; Military Times interviewed us, and the article should be out shortly; there has been no negative response so far.”

As part of their mission to raise awareness of the problem, Figley and Russell will also appear Wednesday, June 30 at 6 p.m. (CST). in the second in a series Facebook Live shows titled “Championing Mental Health.” They will participate in a panel discussion on what kind of legislation is needed to create military mental health policy reform.

“Championing Mental Health” will also feature clips from the documentary Stranger At Home: The Untold Story of American Military Mental Health,” which will be released in September, along with remarks from U.S. Rep. Adam Schiff, D-California.

Between their book and the “Championing Mental Health” series and upcoming documentary, Figley said he is confident that the issue is finally getting the attention it deserves.

Figley said the documentary supports the thesis in their book about the extent of the mental health problem in the military.

“This is one of the most ambitious efforts of supporting our thesis discussed in the book, Figley said. “Those who experience war trauma are in the majority of those who experienced (war). These and all war veterans deserve the respect and support from all of us, not to mention help in the form of psychological first aid to address their hidden injuries of war.”

He said the book has three primary purposes – to generate public awareness about the nature and causes of preventable wartime crises and the military’s attempt to resolve its mental health dilemma, to identify solutions to improve the quality of mental health inside and outside the military, and to end the generational cycle of neglect and self-inflicted harm.

“Our analysis is not a bashing of the military or the people who serve, nor is it about political decisions about going to war,” the authors write in the book’s introduction.  It is truly intended to be the first-ever, honest, self-reflection of military mental health, where we have been and where we need to go.”