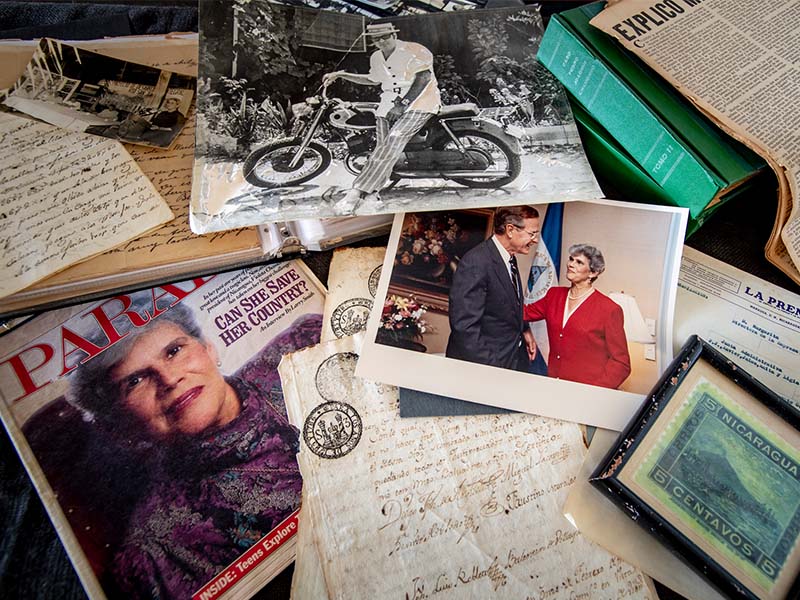 The Latin American Library at Tulane University has acquired the Chamorro Barrios Family Papers (1767-1997), one of Nicaragua’s most influential families and key players since the 18th century. (Photo by Paula Burch-Celentano)

The Latin American Library at Tulane University has acquired by donation the Chamorro Barrios Family Papers (1767-1997), one of Latin America’s most influential families and key players in the national life of Nicaragua since the 18th century.

“This collection substantially enhances Tulane’s historical role as a center for Central American scholarship,” said Hortensia Calvo, the Doris Stone Librarian and director of the Latin American Library. “It is rich in previously unexplored documents which will add new insights on the history of Nicaragua from all periods, including such topics as freedom of the press and civil liberties, political parties and elections, civil society, economic development and border issues with neighboring countries among many others.”

The archive includes the papers of four prominent members of the Chamorro family: Pedro Joaquín Chamorro Zelaya, Pedro Joaquín Chamorro Cardenal, Violeta Barrios de Chamorro and Antonio Lacayo Oyanguren. The papers of Pedro Joaquín Chamorro Zelaya, a distinguished journalist and historian whose life spanned the first half of the 20th century, are especially rich in the documentation on earlier periods of Nicaraguan history. He acquired Nicaragua’s leading newspaper La Prensa in the 1930s, which has been led by successive generations of the Chamorro family and served as a key organ of dissent against the repressive regimes of the Somoza family earlier in the century, as well as the current government led by Daniel Ortega.

Also included in the collection is the Chamorro family archive containing family documents, political writings and other papers from 1767 through the 20th century. The papers of Pedro Joaquín Chamorro Cardenal contain personal correspondence and thoroughly document events surrounding his 1978 assassination. The papers of Violeta Barrios de Chamorro, the first elected woman president of the Americas, cover her presidential campaign in the late 1980s and the years she served as head of state as documented in non-governmental, private papers and correspondence and thousands of photographs. The papers of Antonio Lacayo Oyanguren cover her years as a presidential candidate and later as head of state, as well as his own political activity. The family’s personal files relating to the newspaper La Prensa hold extensive documentation of government censorship from the 1930s into the 1980s.

"I could not be more thrilled about this acquisition. The Chamorro family has been central to Nicaraguan politics and society. It is impossible to understand the country’s struggles for democratic governance and freedom of expression without examining [the family’s] role,” said Ludovico Feoli, executive director of Tulane University’s Center for Inter-American Policy and Research.

The Chamorro Barrios Family Papers will be available for consultation to the public upon completion of cataloging and preservation measures in late 2021. All materials are and will be added to the special collections of The Latin American Library, one of the foremost repositories in the world for the study of Nicaragua.

“Tulane University and The Latin American Library are deeply appreciative to the Chamorro Barrios family for donating their extraordinary archive, which will be unrestricted for access by scholars and students,” Calvo said.

Learn more about The Latin American Library at Tulane University by visiting lal.tulane.edu.