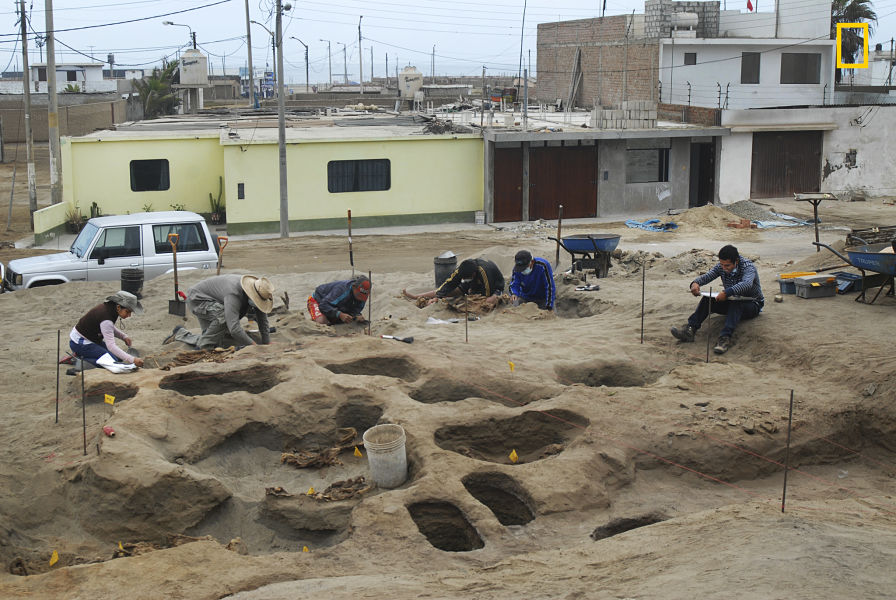 Researchers uncovered the remains of more than 140 children and 200 young llamas. (Photo by Gabriel Prieto/National Geographic)

A team led by Tulane University professor of anthropology John Verano and Gabriel Prieto of the Universidad Nacional de Trujillo recently uncovered the site of a mass child sacrifice that took place more than 500 years ago. The discovery was first reported in a National Geographic exclusive and has been picked up by international news organizations including CBS News and BBC.

Archeologists made the discovery on the northern coast of Peru, where the Chimú empire flourished between the 12th and 15th centuries. In 2011, children playing in the sand dunes found human bones at the site, which is less than a half mile from the ancient Chimú capital of Chan Chan and near the modern city of Trujillo. Verano joined Prieto to lead the dig and the team excavated the bones of more than 140 children and 200 young llamas.

Verano says it’s the first evidence of child sacrifice by the Chimú and one of the largest discoveries of child sacrifice anywhere in the world. Researchers think the region may have been experiencing devastating floods at the time.

“In most societies, human sacrifice is the most precious gift you can give if you need to make an offering to the gods,” says Verano. “It’s some kind of event that happened, some kind of crisis where they felt they had to sacrifice a large number of children and llamas. We may never know why they did this but it’s important to document it.”

Verano plans to return to Peru this summer with support from the National Geographic Society, along with grants from the Carol Lavin Bernick Family Foundation and the Roger Thayer Stone Center for Latin American Studies. The team will include two graduate students and one undergraduate student from Tulane’s Department of Anthropology.