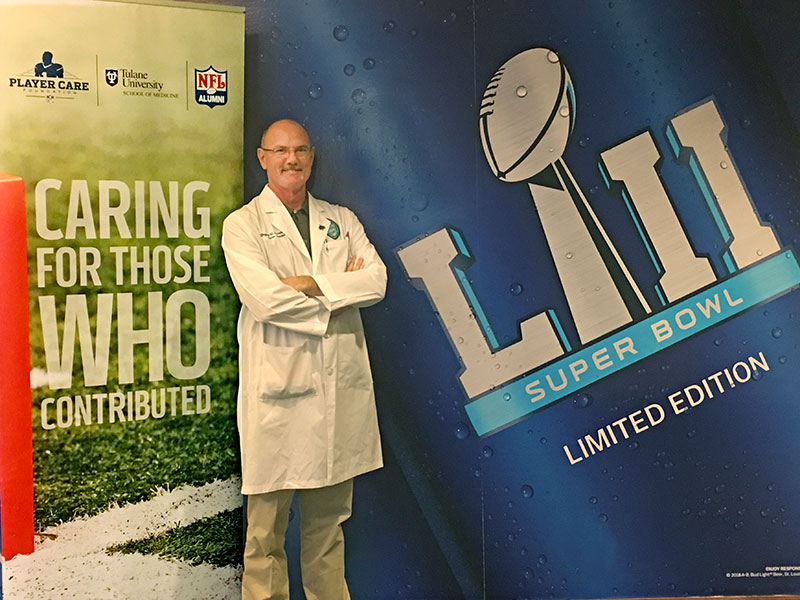 Dr. Gregory Stewart and a team from Tulane University School of Medicine are in Minneapolis for Super Bowl LII to conduct health screenings for more than 100 retired NFL players for the NFL Player Care Foundation's Healthy Body & Mind Screening program.

Tulane University physicians and staff are in Minneapolis for football’s biggest game of the year — Super Bowl LII — to help former players stay in good health.

A team from Tulane University School of Medicine will be conducting three days of health screenings for more than 100 retired NFL players for the NFL Player Care Foundation. Tulane is the research and medical partner for the Foundation’s Healthy Body & Mind Screening program.

Tulane will evaluate former athletes for cardiovascular and prostate health and recommend follow-up care, if necessary. The program also offers mental health resources and health education. Tulane staff conduct 10 screenings for the program across the country each year and see more than 500 former players annually.

“We are finding people who have either uncontrolled blood pressure problems that they weren't aware of or other issues at every single screening we go to,” said Gregory Stewart, MD, co-director of the Tulane Center for Sport and the W. Kennon McWilliams Professor in Sports Medicine. “This includes kidney issues and prostate cancer.”

This will be Tulane’s third Super Bowl event, but Stewart says the excitement and fanfare in each new city only builds each year.

“It’s probably the biggest sporting event in the world,” he said. “And you're there to be a part of it and not just there to experience it.”

The NFL Player Care Foundation hosts screenings across the country in NFL team cities and at regional events that attract large numbers of retired players such as Pro Football Hall of Fame Week and the NFL Players Association and NFL Alumni Annual Meetings. The screenings are offered as part of the NFL Player Care Foundation’s research programs, which help to advance public awareness and scientific understanding of health issues that affect former NFL players.