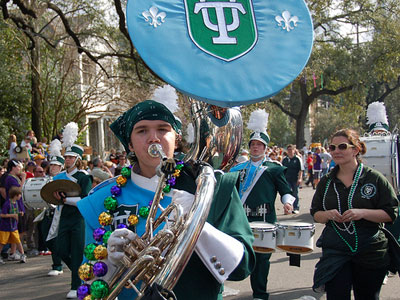 Carnival season is upon us. Here"s a list of all you need to know for Mardi Gras 2009, including parade schedules, safety tips, rules for guests of Tulane students, and special events going on for Tulanians around the country. Laissez les bon temps rouler!

The Tulane University Marching Band is featured in some of the biggest and most beloved Mardi Gras parades. They bring the Tulane faithful to their feet and energize the entire community with the Green Wave spirit! Watch for them at Mardi Gras in 2009 in the following parades:

The Mardi Gras Collection is an online exhibition of classic carnival float designs, ball invitations, photographs and more dating from the 1800s to modern times.

Mardi Gras parties for Tulane alumni around the country

Send e-mail to pr@tulane.edu to suggest a link