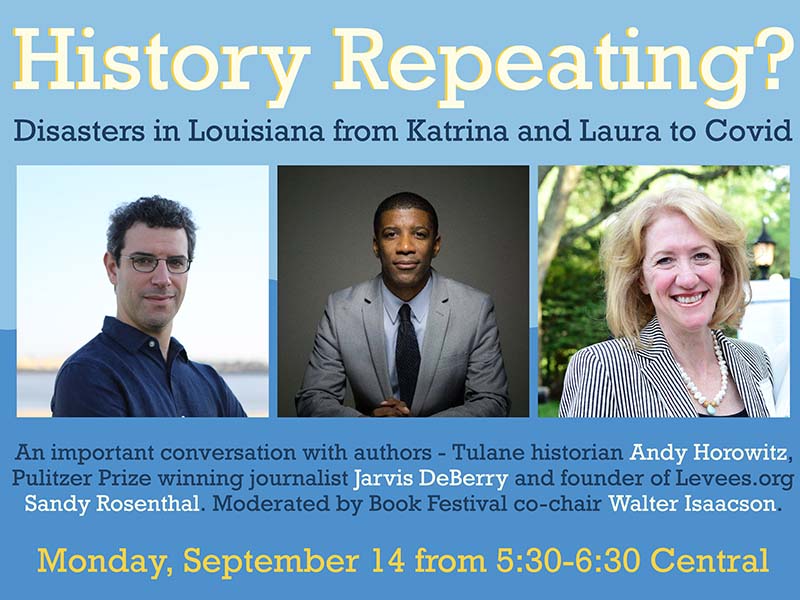 Amid the current pandemic and destruction left in the wake of Hurricane Laura, authors Andy Horowitz, Jarvis DeBerry and Sandy Rosenthal will discuss if the current climate of disasters is a case of history repeating itself in Louisiana.

Is the current pandemic and destruction left in the wake of Hurricane Laura a case of history repeating itself in Louisiana? These will be the topics when The New Orleans Book Festival at Tulane University hosts a conversation with notable authors including, Tulane historian Andy Horowitz, Pulitzer Prize-winning journalist Jarvis DeBerry and Sandy Rosenthal, founder of Levees.Org, from 5:30-6:30 CDT on Monday, Sept. 14. Walter Isaacson, best-selling author, Tulane professor and book festival co-chair, will moderate the discussion. The event is free, but registration is required to participate. Please click here to register.

Fifteen years after Hurricane Katrina struck the Louisiana coast as a Category 3 hurricane and resulted in the costliest hurricane damage in U.S. history to date, Category 4 Hurricane Laura became the strongest hurricane to hit the state since 1856 when it made landfall on Aug. 27 near Cameron, Louisiana.

Louisiana, along with the rest of the nation, is also enduring one of the worst global pandemics since the 1918 influenza pandemic.

Horowitz, who studies the history of disasters, is an assistant professor of history and the Paul and Debra Gibson Professor in Tulane’s School of Liberal Arts. He recently published a new book detailing how Katrina’s causes and consequences reach across a century. The book— Katrina: A History, 1915-2015 (Harvard University Press)— is available here, as well as the Tulane University Bookstore.

Publisher’s Weekly called the book a “vivid and persuasive chronicle of the causes and consequences of Hurricane Katrina. Even readers who have never visited the Crescent City will be moved by this incisive account.” John Barry, author of Rising Tide: The Great Mississippi Flood of 1927 and How it Changed America, called the book “the most important book about Katrina so far.”

DeBerry is the founder and editor of the Louisiana Illuminator, part of the States Newsroom, a national journalism nonprofit group. He most recently worked as a columnist for Cleveland.com.

DeBerry spent 22 years at The Times-Picayune (and later NOLA.com) as a crime and courts reporter, an editorial writer, columnist and deputy opinions editor. He was on the team of journalists awarded the Pulitzer Prize for Public Service after that team covered Hurricane Katrina and the deadly flood that followed.

In addition to the shared Pulitzer, DeBerry has won awards from the Louisiana Bar Association for best trial coverage and awards from the New Orleans Press Club, the Louisiana/Mississippi Associated Press and the National Association of Black Journalists for his columns. His book I Feel to Believe: Collected Columns is available for pre-order here.

A Tulane alumna, Rosenthal founded the Levees.Org organization in 2005 to help educate the American public about the cause of the levee failures and catastrophic flooding in New Orleans following Hurricane Katrina. She has been a blogger with The Huffington Post since 2009 and The Times-Picayune/The New Orleans Advocate since 2007. She received her Master of business administration degree from Tulane in 1981. Tulane’s A. B. Freeman School of Business honored Rosenthal as the Tulane Outstanding Social Entrepreneur of the Year for 2018. Her book Words Whispered in Water: Why the Levees Broke in Hurricane Katrina is available here, as well as at the Tulane University Bookstore.