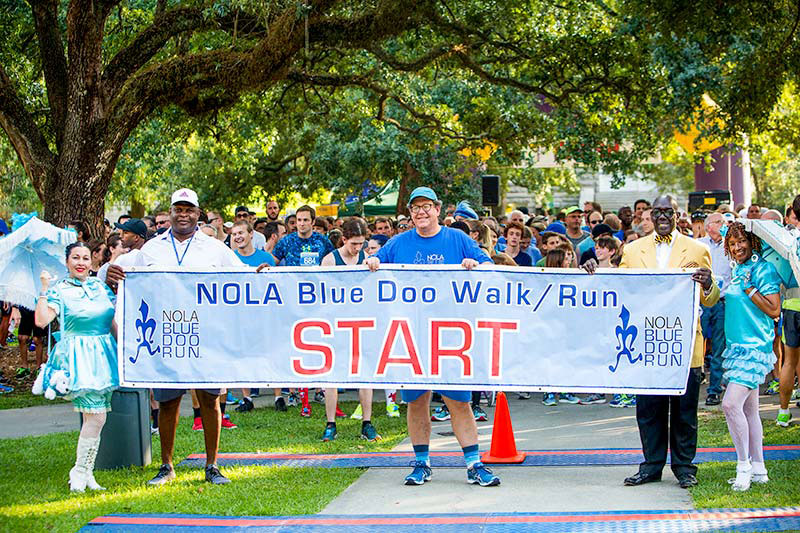 “NOLA Bluedoo started five years ago with the idea that we could raise funds for prostate cancer research and honor those afflicted with this disease while also having a bit of New Orleans-style family fun,” said Dr. Oliver Sartor, head of Tulane’s prostate cancer research program. “Please help us continue the mission and join us for a great time on Tulane’s beautiful uptown campus.”

Costuming in blue – the color of prostate cancer awareness – is encouraged, Sartor said.

The two-mile race, held in partnership with the New Orleans Track Club, begins and ends at Gibson Quad (behind Gibson Hall on St. Charles Avenue). The race has grown from almost 600 runners, walkers and attendees the first year to more than 1,000 last year.

Advanced registration for walkers/runners is $30; university students (with student ID) pay $15 through Sept. 10 and $20 on race day.  Don’t want to walk or run?  A $25 Party Pass allows access to the celebration of survivorship, including complimentary food and refreshments and entertainment by the Bluedoo Allstars, featuring Brian Stoltz (Funky Meters) on guitar, Tony Hall (Dumpstaphunk) on bass, John ‘Papa’ Gros (Papa Grows Funk) on keyboards and Raymond Weber (Joe Sample) on drums. There will also be special appearances by the Babydoll Sisterhood, the Disco Amigos, the Amelia EarHawts, the Pussyfooters, the Harley Owner’s Group, the Laissez Boys of New Orleans, and Saints Super Fan “Soul Saint” with other members of the Big Easy Mafia.

Prostate cancer is the second leading cause of cancer death in American men, behind only lung cancer. According to the American Cancer Society, one in seven men will be diagnosed and one in 39 will die of prostate cancer. In Louisiana, approximately 2,600 men are diagnosed with prostate cancer annually.

For more information, please visit www.nolabluedoorun.org or contact Melanie Cross at 504-988-6592 or mcross@tulane.edu.