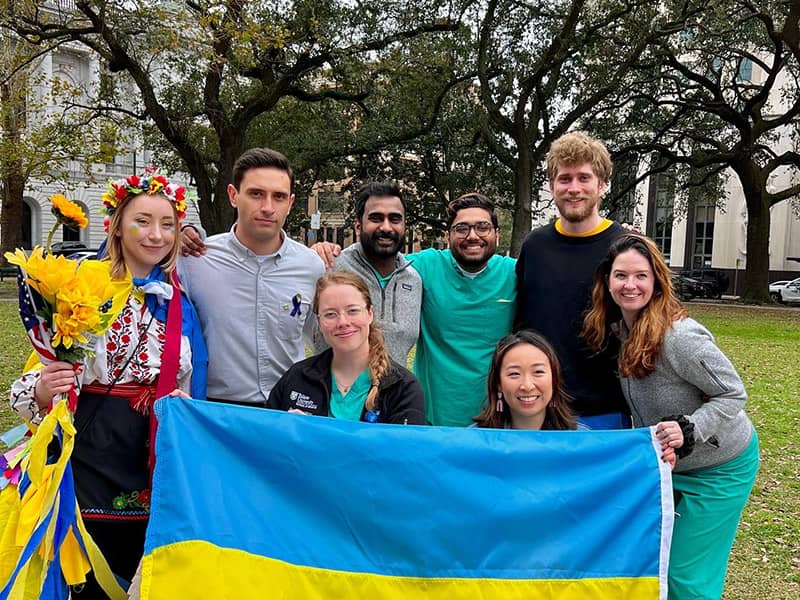 Oleksandr Orak, second from left, pictured with a group during a rally for Ukraine.

When a video of airstrikes against Ukraine started circulating on social media several months ago, Tulane medical student Oleksandr Orak hoped that it wasn’t real.

“I started seeing videos being posted by people in Ukraine that I knew personally, who themselves were unsure if it was real,” said Orak, a third-year joint MD/MBA student at the School of Medicine and the A. B. Freeman School of Business. “When the reality set in that this was actually happening, I realized that would be followed by an enormous conflict.”

Kharkiv, Ukraine was one of the first cities to be attacked when the Russian invasion began in February. It’s located in eastern Ukraine and Orak lived there with his family until he was 14 years old. Although his immediate family now lives in the United States, he has many friends and loved ones that that are still in Ukraine.

“It’s a very painful situation,” Orak said. “A lot of people that are still in Ukraine have been using telegrams to exchange messages and stay in contact with their loved ones so I started sending messages to people that I went to school with and sometimes I can hear bombs going off in the background. Hearing that directly made it feel a lot more real in the moment and that motivated me to rally people to try to do something about it.”

Thousands of miles away from his home country, Orak has been gathering support in New Orleans to do what he can to help the thousands of people in Ukraine that have been impacted by the invasion.

Orak and other volunteers have collected more than 90 boxes of medical supplies, which are being shipped to Ukraine. The Ukrainian Medical Association of North America, a voluntary non-profit association of professionals licensed to practice in their areas of health care in the United States and Canada, and the Human Rights Fund have also stepped in to support with engaging the community to aggregate these resources, specifically medical supplies to send them to places that have the greatest need for humanitarian aid through a centralized approach.

The Ukrainian community in New Orleans has organized multiple rallies and started a clothing brand under the name Kryla. It’s a New Orleans-based NGO formed by Ukrainian-Americans, friends and allies that aims to bring humanitarian aid and medical supplies to places in Ukraine with the most need. 100% of proceeds go toward humanitarian efforts in Ukraine.

The Biden administration is allowing 100,000 Ukrainian refugees to enter the U.S. Orak is working to help relief organizations who are assisting families that need access to health care and social services.

“I'm the first to go to med school in my family, and I'm the only English speaker in my family as well. There’s a ton of privilege that comes with this opportunity I’ve been given, and I am happy that I’m able to do something to help out refugees in Ukraine and the folks who make it here.”