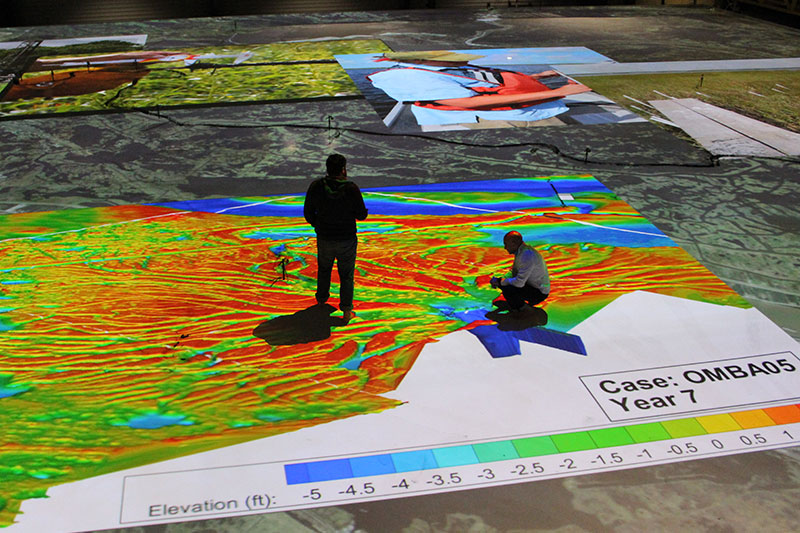 Tulane professor Ehab Meselhe, right, uses computer models to predict what natural systems such as coastal areas, rivers, deltas and watersheds might look like in the future. (Photo courtesy of Amy Wold of the Water Institute of the Gulf)

Ehab Meselhe, a professor in the River-Coastal Science and Engineering Department at Tulane University, will be honored this week for his contribution to the development of a coastal master plan for Louisiana.

Meselhe is being recognized as a Top 25 Newsmaker by the Engineering News-Record, joining construction industry leaders from across the United States who the publication hailed as astute leaders, risk takers, clever problem solvers and passionate community servants.

“It shows a recognition of the importance of how science can inform and support the decision-making process of strategic and critical environmental restoration programs,” Meselhe said of the honor.

“I am actively pursuing solutions that transcend across technical disciplines and from the very people who call these places home.”

As vice president of engineering at the Water Institute of the Gulf, Meselhe worked with a team of engineers and scientists to develop the 2017 Master Plan for Coastal Protection and Restoration, an ambitious effort to respond to the loss of Louisiana’s coastal land and threats from storm surge. He has since stepped down from the Water Institute of the Gulf to work fulltime at Tulane.

The master plan features a list of projects that build or maintain land and reduce risk to coastal communities. It identifies a long-term program of construction, operations and maintenance along with adaptive management to be implemented as funds become available over the next 50 years.

Meselhe was cited, in part, for the way he worked with other scientists and engineers to come up with potential solutions to the coastal crisis. His ability to articulate the plan led to almost unanimous approval of the Master Plan by the state Legislature.

“He has the unique ability to translate highly technical concepts and results to folks so that they are easily understandable, easily digestible and effective,” Bren Haase, deputy executive director of Louisiana’s Coastal Protection and Restoration Authority, which produces a new master plan every five years, told the Engineering News Record.

Meselhe’s work on such issues as sea-level rise, shoreline erosion and subsidence continues at Tulane where, as a professor in the Department of River-Coastal Science and Engineering, he is working on developing digital models that can be used to look back in time at how natural systems such as coastal areas, rivers, deltas and watersheds evolved or look forward and predict how they might look in the future.

“I am actively pursuing solutions that transcend across technical disciplines and from the very people who call these places home,” he said.