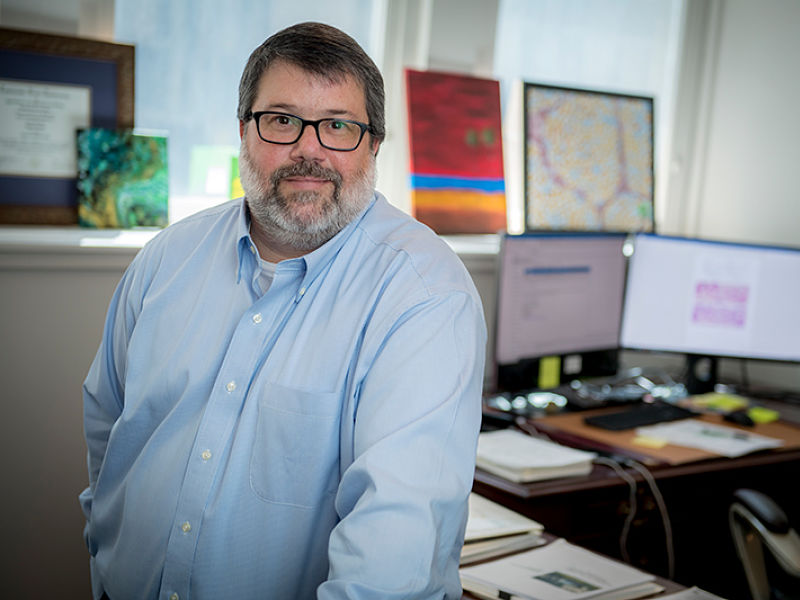 Chad Steele is professor and chair of the Department of Microbiology and Immunology at Tulane University School of Medicine. (Photo by Paula Burch-Celentano)

The spores that live on everything from carpets to ceiling tiles can cause a severe reaction among the large group of asthmatics who demonstrate sensitivity to fungi.  A new Tulane University study aims to discover why this certain group of asthmatics experiences worse asthma, characterized by lower lung function and a more severe allergic reactions, when compared to asthmatics who react to other irritants.

The study is being led by Chad Steele, professor and chair of the Department of Microbiology and Immunology at Tulane School of Medicine. It will build on over a decade of Steele’s work, which has helped uncover the mechanisms behind asthmatic sensitivity to fungi.

Using an experimental animal model that mimics the allergic airway inflammation seen in human response to fungi, Steele and his team will study how the immune system reacts to chitin.  Chitin is the fibrous substance than makes up the outer “exoskeletons” of arthropods, such as shellfish and cockroaches, and is also a significant component of the cell walls of fungi. Previous research has not fully deciphered how and why asthmatics react to chitin, but Steele aims to change that by taking a deeper dive into the scientific mechanisms.

“We have other components that we’re also testing,” Steele said. “Fungi have a lot of carbohydrates and sugars in their cell walls, so we’re looking at things like beta-glucans and mannans and how chitin interacts with these in provoking an allergic reaction. These are components that are known to be recognized by the immune system and some are more inflammatory than others.”

The scientists hope to precisely define how chitin triggers an asthmatic response. While the research is mostly focused on the experimental animal model, Steele is also including a human translational element in this study. Mammals have substances (enzymes called chitinases) that are known to break down chitin, and there are also chitinase-like proteins that regulate immunity. Steele will investigate the levels of these chitinases and chitinase-like proteins in samples from human asthmatics and correlate them with the severity of their asthma. What he uncovers could lead to better ways to treat patients who suffer from this type of asthma.

“We have multiple drugs now that block a variety of different inflammatory mediators in asthma,” Steele said. “If we can find the right one, we have the potential to modulate severity in this subset of patients who are highly sensitized to fungi and have difficulty controlling their asthma.”

The study is being funded by a four-year, $2 million grant by the National Heart, Lung and Blood Institute at the National Institutes of Health.