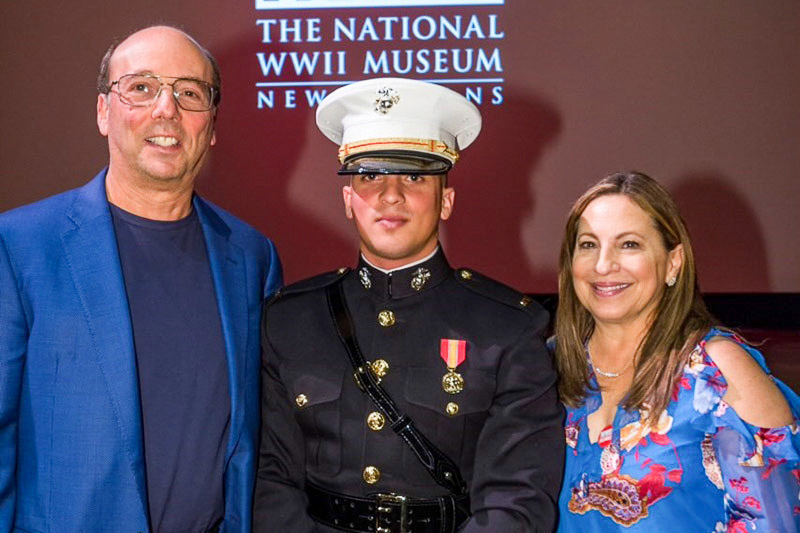 Stuart Grant, left, and his wife Suzanne Grant flank their son Sam, a 2019 graduate of Tulane and a lieutenant in the United States Marine Corps. (Photo courtesy of the Grant family)

The gift from the Grants’ I Could Do Great Things Foundation will double the number of research faculty in the Jewish Studies department. It provides funding for a new endowed chair that will allow the department to recruit a senior scholar, as well as to launch a national search for a junior faculty position. The gift will also provide operating support for the Center that will bear their name.

“Thanks to the tremendous generosity of Stuart and Suzanne Grant, we will build a world-class faculty and implement a dynamic and innovative slate of programming."

“Creating new intellectual connections, the Grant Center will transform the field by practicing across disciplinary and subfield boundaries, emphasizing the global orientation of the American Jewish experience,” Cohen said. “Through the Grant Center, we will become the academic leader for the innovative and holistic study of American Jewry.”

“Thanks to the tremendous generosity of Stuart and Suzanne Grant, we will build a world-class faculty and implement a dynamic and innovative slate of programming,” Cohen said.

School of Liberal Arts Dean Brian Edwards said the gift will enhance what is already one of the school’s most popular departments and place Tulane at the forefront of American Jewish studies.

“There is great interest in Jewish studies among our students,” Edwards said. “In the last few years, nearly one in four undergraduates enrolled in a Jewish Studies course while at Tulane. This gift allows us to expand the faculty dramatically, which will provide students with the opportunity to study with professors whose research is setting the direction of the field.”

He added, “At a moment when the need to understand American Jewish history has never been more vital, the importance of establishing a center dedicated to the American Jewish experience cannot be overstated.”

The Grants hope their lead gift will inspire more people to support Jewish Studies at Tulane.

The Grants formed the I Could Do Great Things Foundation in 2009 to support a range of social initiatives related to education, Jewish causes and projects that strengthen communities. The Grants established the Stuart & Suzanne Grant Center of Excellence at the University of Delaware Hillel, making UD one of the first four Hillels in the country to have a Center of Excellence. The Grants are a mainstay in the Jewish community in Delaware as a major supporter of the Jewish Federation of Delaware and Congregation Beth Shalom. The Grants also provided an initial gift to an initiative at Tulane University that fosters academic collaboration between U.S. and Israeli universities to address shared energy challenges.

Stuart Grant is the co-founder of Grant & Eisenhofer P.A., a world- renowned law firm that specializes in such areas as corporate law, fiduciary responsibility, securities and investments, private equity and fixed income and appraisal remedies. He recently retired from Grant & Eisenhofer to devote more time to Bench Walk Advisors, a litigation finance hedge fund he co-founded.

Suzanne Barton Grant is an accomplished businesswoman and philanthropist. A former senior vice president at Smith Barney, she currently serves as the chair of the board of the Delaware State Pension Fund. Suzanne is former president of the Jewish Federation of Delaware and the immediate past national campaign chair for Jewish Federations of North America.

The Grants’ son Sam graduated from Tulane in May 2019 with a Bachelor of Science degree in psychology. He is now a lieutenant in the United States Marine Corps.