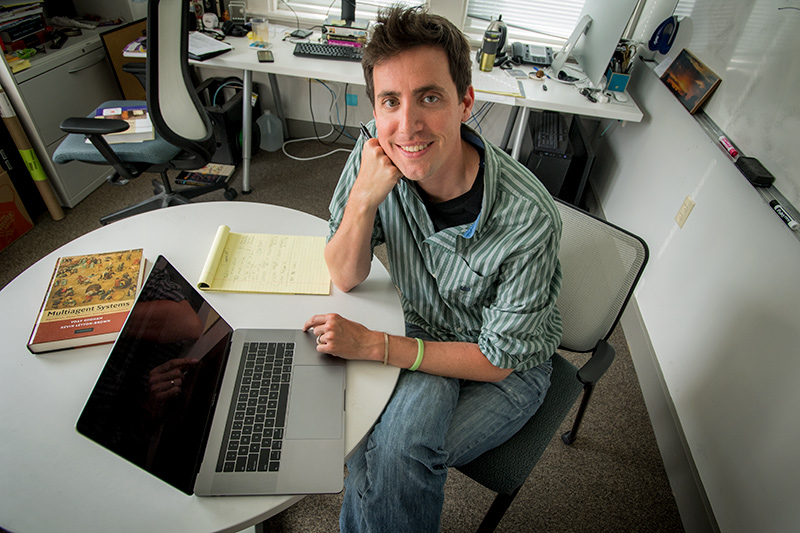 Nicholas Mattei, an assistant professor of computer science at Tulane University, focuses much of his research on ethics in artificial intelligence. (Photo by Paula Burch-Celentano)

Nicholas Mattei, an assistant professor of computer science who specializes in artificial intelligence, is the recipient of two recent awards.

Mattei received an IBM University Research Award for research that will help the next generation of AI technologies to learn, adapt and decide in complex environments.  He was also selected as one of only 14 researchers in the world to deliver an Early Career Spotlight Talk at the International Joint Conference on AI (IJCAI), to be held in Kyoto, Japan (or virtually) in January 2021.

The one-year IBM University Award, valued at $40,000, will allow Mattei and his team to advance their research work on providing machines with the capability to combine features of symbolic and formal reasoning with data interpretation and machine learning in order to make better, more transparent, and ethical decisions.

While modern AI systems have demonstrated amazing performance in a number of domains including image processing, text translation, and simple question answering, Mattei said, many of the systems developed for these applications are narrow in scope and often don’t leverage multiple types of reasoning and learning for particular applications.

“The complex tasks that we often ask modern AI decision making algorithms to perform, expose a number of limitations of current AI systems including the lack of deep understanding of information coming from data, the absence of common sense reasoning, the difficulty in dealing with causality, and the inability to learn general concepts from small amounts of data,” he said.

Mattei said the goal of this project is to advance basic research in computer science that will hopefully have impacts in a variety of areas that rely on AI enabled decision making.

At the IJCAI Conference in Japan, Mattei will present his paper “Closing the Loop: Bringing Humans into Empirical Computational Social Choice and Preference Reasoning.”

Presenters are by invitation based on nominations from the IJCAI program committee. The organization started the Early Career Spotlight track in 2016 to introduce the work of some of the world’s most active early career researchers in AI.

“We then use these formal models of preference to feed into algorithms for group decision making / social choice. For instance, selecting matchings for ride sharing, allocating things like computing resources to individuals, or even picking proposals to fund.”