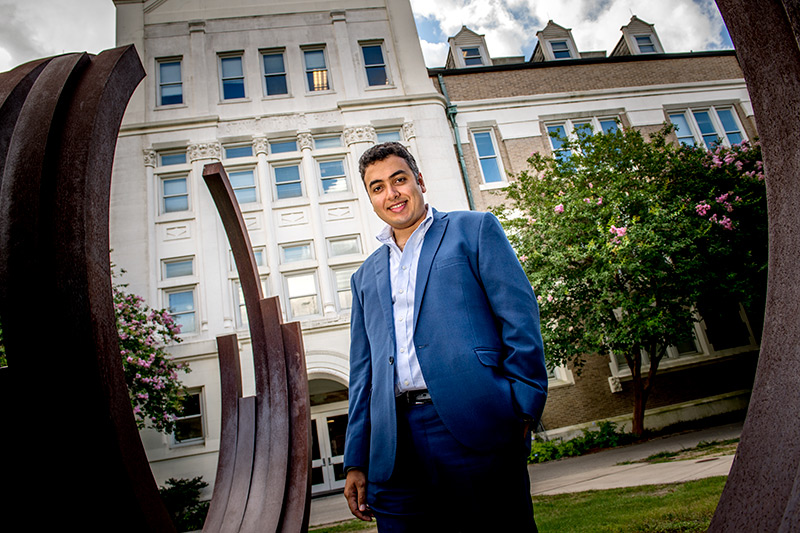 Michael Naguib, an assistant professor in the Tulane School of Science and Engineering, specializes in two-dimensional (2D) materials and electrochemical energy storage. (Photo by Paula Burch-Celentano)

Naguib, an assistant professor in the Department of Physics and Engineering Physics, is the winner of the annual KROTO Award from the NANOSMAT Society as well as the American Ceramic Society’s Robert L. Coble Award for Young Scholars of 2018.

The KROTO Award, named after the late Nobel Prize laureate Sir Harold Kroto, is conferred on an outstanding, dynamic young researcher for outstanding achievements and contributions to the field of nanoscience and nanotechnology. Naguib will receive his honor and present his award-winning lecture in September at the 13th International Conference on Surfaces, Coatings and Nanostructured Materials, which will be held in Gdansk, Poland.

“This award recognizes your professional career achievements and your stature attained in the field of nanoscience and nanotechnology.”

The Robert Coble Award recognizes an outstanding scientist 35 years old or younger who is conducting research in academia, industry or at a government-funded laboratory. It is named for the late professor whose lifelong mission was to enhance the achievement and advancement of young ceramic scientists. Naguib will receive the award in October.

Such developments include new 2D materials which consist of a single layer of atoms, and can be used in the next generation of batteries and other electrochemical energy storage systems. In addition to discovering and creating new materials, Naguib and his team are working to develop inexpensive materials for commercially available electrochemical energy storage systems that contribute to environmentally friendly and sustainable technologies.