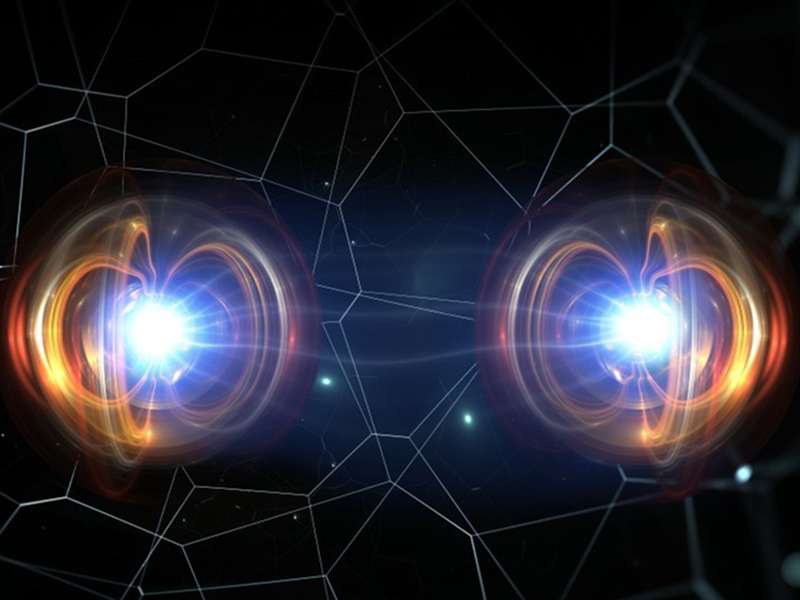 The photo above is an artist's depiction of an entangled pair of photons that may be used for quantum communication or computation. (Photo courtesy of the U.S. Army Research Office)

Tulane University researchers are teaming up with the U.S. Army Research Office on a machine learning project that could pave the way for small, mobile quantum networks and possibly lead to unbreakable, secure communication systems, quantum computers and enhanced radar.

As part of the research, scientists combined machine learning with quantum information science, or QIS, using photon measurements to reconstruct the quantum state of an unknown system. An unknown system might be an image a facial recognition device does not recognize.

Tulane team members on the project include Ryan Glasser, associate professor of physics, and researchers Onur Danaci and Sanjaya Lohani. They conducted the research with Brian Kirby, a scientist at the U.S. Army Combat Capabilities Development Command’s Army Research Laboratory. Their research has been published in the Institute of Physics journal Machine Learning: Science and Technology.

As research and capabilities are now maturing to the point that real-world implementations are within sight, these are the sorts of engineering problems that we need to solve.”

“We wanted to apply machine learning to problems in QIS, as machine learning systems are capable of making predictions based on example data sets without explicit programming for the given task,” Kirby said.

“Machine learning has excelled in recent years in fields such as computer vision, where a machine learning algorithm trained on large sets of pre-classified images can then correctly classify new images that it has never seen before.”

For example, banks often use machine learning systems to read the handwriting on checks, even though the program has never seen that particular handwriting.

“In image recognition, the machine learning algorithms try to decide if something is a car or a bike,” Lohani said. “Machine learning systems can be just as effective at looking for particular features in measurement data that imply what sort of state it came from. In both cases, the input data can be considered as a two-dimensional array, and the ML system attempts to pick out particular features in the array.”

However, researchers will need to develop alternative methods to process the classical information associated with quantum information protocols.

“This field often overlooks the classical information processing needed to operate quantum information systems,” Glasser said. “However, as research and capabilities are now maturing to the point that real-world implementations are within sight, these are the sorts of engineering problems that we need to solve.”

The team recently received a nine-month, $60,000 short-term innovative grant through the Army Research Office for a project that combines the fields of machine learning, a subset of artificial intelligence, with quantum technologies.

“More specifically, we will be developing artificial neural networks (computer programs that are loosely inspired by neuronal connections in the brain) that will enhance our ability to measure quantum states of light.”

A difficulty arises when measuring quantum states in order to ensure that the intended quantum system is generated. Typically, this is done by repeatedly generating the quantum system, then repeating the same measurement tens of thousands of times, as in standard QST.

“Once this is done, classical computational and statistical methods are used to infer what the most likely state of the quantum system was that you've generated,” Glasser said.

QIS is a rapidly advancing field that exploits the properties of microscopic quantum systems, such as single particles of light, to achieve applications in communication, computing and sensing, which are either impossible or not as efficient under conventional means.