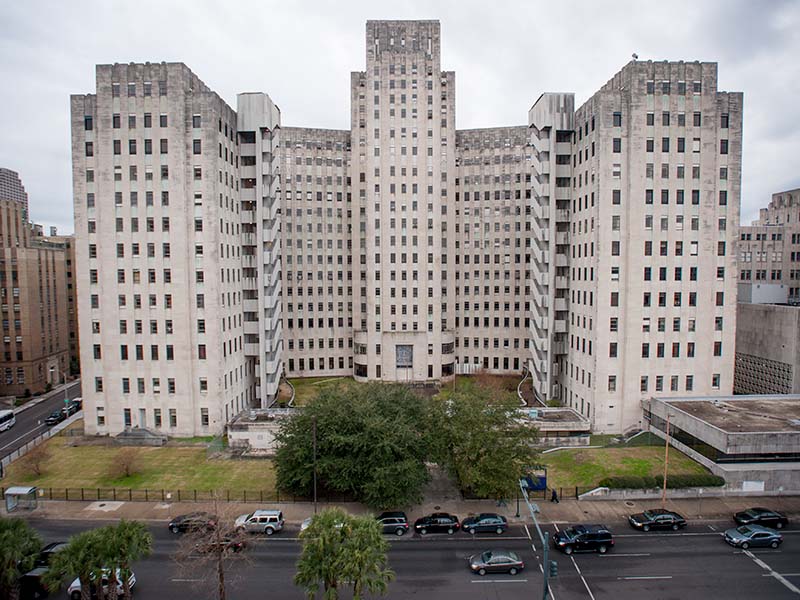 Tulane will occupy over a third of the building, serving as the core tenant and enabling the major redevelopment the iconic Tulane Avenue building, which has been empty since Hurricane Katrina in 2005.

Tulane University, along with developers 1532 Tulane Partners, Inc. and SKK Opportunity Zone Fund I, LLC, is pleased to announce a new phase in the redevelopment of the former Charity Hospital building, which will result in Tulane initially occupying nearly 350,000 square feet through a long-term lease. Over the next few years, the developers and Tulane will transform Charity into a mixed-use complex with apartments, retail, educational institutions and other uses, all anchored by Tulane’s academic and research presence.

Tulane will occupy over a third of the building’s million square feet, serving as the core tenant and committing to and enabling the major redevelopment and reimagining of the iconic Tulane Avenue building, which has remained empty since Hurricane Katrina in 2005. Tulane will fill its portion of the building with state-of-the-art spaces for research, teaching and administration.

The Charity project is a central component of a major expansion of Tulane’s downtown campus in the heart of the city’s biomedical corridor. The goal is to place more labs and scientists together in an innovation district downtown where Tulane discoveries can come to market faster, launch spinout companies, support community startup talent and attract outside investment designed to transform New Orleans into a hub of bioscience research. External funding for Tulane research has risen close to 50 percent over the last four years and is expected to increase another 50 percent over the next few years, supporting a robust startup community in the innovation district in the years to come.

“The American landscape is filled with cities that have been transformed to become leaders of the 21st-century economy thanks to the presence of a major research university in the center of their downtown commercial district,” Tulane President Michael Fitts said. “This is the shared future of New Orleans and Tulane.”

Tulane and the project developers hope that the renewal of this New Orleans landmark will not only put one of the city’s most significant buildings back into commerce but also spur future development throughout the downtown area.

“Developing the building in a way that is true to the roots and spirit of the historic former Charity Hospital has been a guiding principle for Tulane University since this project’s inception,” shared Tulane COO Patrick Norton. “By ensuring this redevelopment is anchored by research labs searching for the newest discoveries and by public health and medical classrooms training the next generation of physicians and leaders in public health and healthcare — all in a space that is accessible and open to the community — we will remain true to those roots.”

The project developers, 1532 Tulane Partners and SKK Opportunity Zone Fund I, LLC, will spend the next two and a half years completing base building construction before Tulane develops and customizes its space with the goal of occupying the building in 2025. Special care will be taken to retain Charity’s iconic art deco facade, main lobby, second-floor auditorium and other historical characteristics while fully renovating the interior to realize the full potential of the building in a new way.

Yoel Shargian and Joseph Stebbins formed 1532 Tulane Partners in 2018 with the vision of maintaining Charity as the incredible heart of the former medical district and creating a hub for a new and vibrant area of research, development, learning and living. This development focuses on people and the future.

“We are thrilled to be a part of redeveloping Charity. This transformative project exemplifies why Opportunity Zones were created,” said SKK co-founder David Shepherd. Added SKK partner Brian Lockhart, “We are very bullish on the future of New Orleans and see it as a great place to invest today. The history and culture of the city are unparalleled.”

“We enjoyed working diligently with Tulane on bringing their vision to fruition and look forward to the rest of the building becoming the shining example of modern development in the area,” Shargian said.