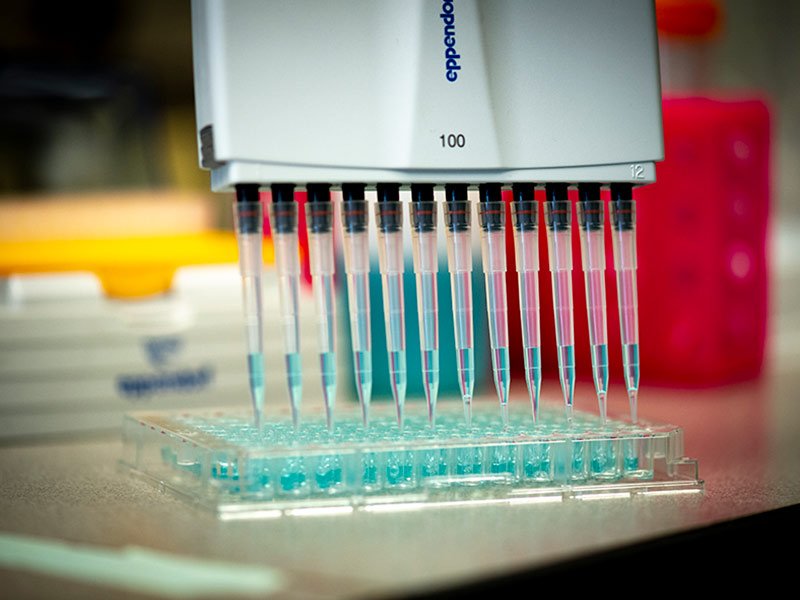 Cycle thresholds (Ct) refer to the number of cycles needed to amplify viral RNA to reach a detectable level on a PCR test for COVID-19. Tulane researchers wanted to see if those with high Ct values, indicating lower viral loads, were less likely to infect others. Photo by Paula Burch-Celentano.

Early in the pandemic, some public health officials called for COVID-19 testing centers to track viral load information among those testing positive as a possible measure for identifying and isolating those most likely to spread the virus.

A new Tulane University study finds that cycle thresholds (Ct) from PCR tests — an indicator of the amount of virus an infected person carries — aren’t a reliable gauge for identifying those most likely to transmit COVID-19. Even those with low viral loads can pass on the virus, according to the report in The Journal of Molecular Diagnostics.

“We wanted to find whether there was a scientifically sound way to quickly triage students with potential high-risk exposure to COVID-19 positive students for quarantine,” said co-lead author Dr. Patrice Delafontaine, executive dean and professor of medicine, pharmacology and physiology at Tulane University School of Medicine.

Some earlier studies found that the Ct value of the RT-PCR testing assay is a surrogate for infectivity. Cutoff Ct values have been proposed as a means to guide isolation and quarantine practices.

Tulane researchers wanted to see if those with high Ct values, indicating lower viral loads, were less likely to infect others. Since all contacts of positive cases had to be quarantined for 14 days, researchers had hoped that Ct values could help reduce quarantine days for those exposed to people with low viral loads. That wasn’t the case, said co-lead author Dr. Xiao-Ming Yin, chair of Pathology and Laboratory Medicine and Dr. Donald R. and Donna G. Pulitzer Professor.

“Through testing and contact tracing, we found that Ct value alone could not predict transmissibility,” Yin said. “We should not overlook positive patients with low viral load, and all contacts of positive patients should be quarantined.”

Last fall, Tulane University established a high-throughput SARS-CoV-2 testing program to support contact tracing, isolation and quarantine efforts needed to limit viral transmission on campus. During the study period, all students were tested twice a week, and students were asked about symptoms they may be experiencing. Contact tracers spoke to all positive case subjects to identify close contacts.

The study looked at 7,440 students who were screened between Sept. 1 – Oct. 31, 2020. Of the 602 positive cases, 195 index cases were identified with one or more reported close contacts. The close contacts were then tested during their mandated 14-day quarantine period for evidence of transmission from the associated index cases. Of these index cases, 48.2% had at least one contact who became SARS-CoV-2 positive, whereas 51.8% of the index cases were nonspreaders with no contacts who subsequently tested positive. Mean Ct values of the spreaders and the nonspreaders were nearly identical.

Researchers also looked at index cases for 481 students undergoing quarantine due to known exposure to the disease. Approximately 18% percent of these students became positive during quarantine. Index cases for the 481 quarantined students were considered spreaders if they were linked to one or more quarantine students with a positive test result, or nonspreaders if they were associated only with students with negative test results. The mean Ct values of the spreader and the nonspreader groups were also similar.

“Taken together, these index cases suggest that Ct values alone do not predict transmission risk, and reporting of Ct values at the individual level, such as by setting a cutoff value of 32, would provide little diagnostic value for case management,” Yin said. “A sensitive and robust SARS-CoV-2 diagnostic testing method is needed to effectively control viral transmission by maximizing the ability to identify and quarantine even those with a low level of viral exposure.”