Tulane study looks at effectiveness of telehealth therapy during pandemic 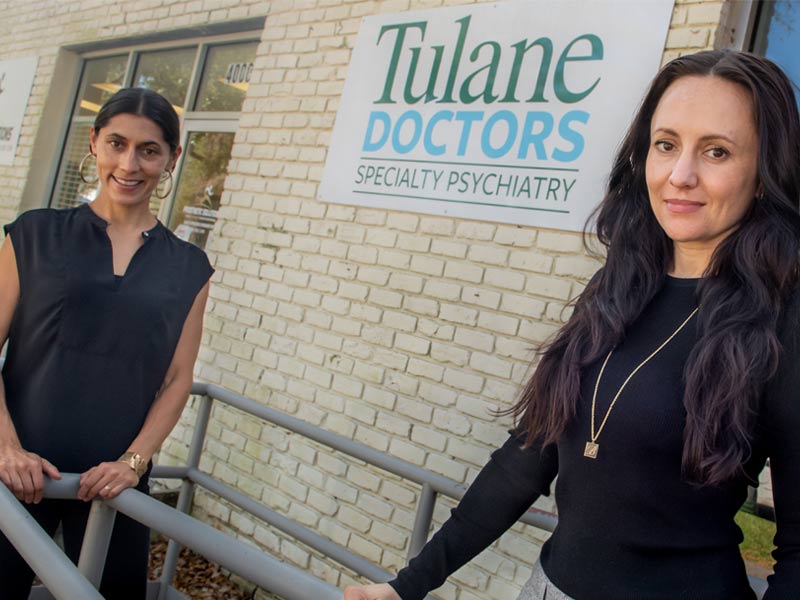 Serena Chaudhry, left, and Dr. Ashley Weiss were part of a team of researchers who studied the impact of virtual therapy during the COVID-19 pandemic. (Photo by Sally Asher)

When COVID-19 was declared a global pandemic in March 2020, the Early Psychosis Intervention Clinic in New Orleans (EPIC-NOLA) quickly transitioned to virtual mental health for an especially vulnerable population of teens and young adults.

Despite logistical challenges, remote therapy improved engagement, mitigated symptoms and reduced repeated hospitalizations, according to a joint study by the Tulane University School of Medicine and the Tulane School of Social Work.

The two schools teamed up on a study that examined the effectiveness of remote therapy during the first wave of the COVID-19 pandemic, which began in March 2020. The study, “Psychosis, Telehealth and COVID-19: Successes and Lessons Learned from the First Wave of the Pandemic,” was recently published in the journal Disaster Medicine and Public Health Preparedness.

“Given that young adulthood is a critical age for early psychosis intervention, telehealth services are unlikely to go away.”

Tonya Hansel, director of the DSW program at the Tulane School of Social Work

Authors of the study include Serena Chaudhry, assistant professor of psychiatry at the Tulane School of Medicine; Tonya Hansel, director of the DSW Program at the Tulane School of Social Work and recent MSW graduate Ariana O’Shea. Dr. Ashley Weiss, assistant professor of psychiatry at Tulane, and Grinasha Dillon also participated in study.

“Louisiana has one of the highest rates of mental illness in the United States,” the study says. “Because people with chronic mental illness seem to be more susceptible to pandemic-related stress, local mental health care providers are preparing for sustained spike in the needs of those with mental illness.”

“Disruption in care, specifically for people living with severe mental illness, is concerning due to its effects on symptom exacerbation and relapse.”

EPIC-NOLA provides comprehensive evaluation and treatment of adolescents and young adults who have recently begun to experience psychosis, which is often associated with emerging schizophrenia. The clinic also treats women experiencing perinatal mood and anxiety disorders.

The study details the process of transitioning from in-person patient visits to virtual treatment, beginning on March 13, 2020. The process involved enacting virtual team meetings and making sure patients were equipped technologically. Patients also had to sign an electronic version of the telehealth consent form.

EPIC-NOLA saw 137 patients a total of 545 times between March 16 and May 15, 2020, compared to 107 patients a total of 533 times during the same period in 2019. The no-show rate during the shelter-at-home period was 28 percent, compared to 32 percent the previous year. Of the 545 patient meetings, 411 were for individual therapy and 134 were for medication management.

Researchers attribute the success of virtual treatment largely to the elimination of transportation as a barrier to clinical care. “Poverty and limited public transportation are pervasive problems across Louisiana and have proven to negatively impact patient care at the clinic,” researchers said.

“Engagement of patients who were at the clinic beyond the traditional two-year mark is also notable, suggesting that telemental health may be a low-barrier clinical intervention for expanding and sustaining continuity of care.”

Despite the many successes achieved during the first wave of the pandemic, there were challenges. For example, the process of acquiring signed consents virtually was onerous and required multiple follow-ups by clinic staff. Obtaining completed and signed paperwork for new patients proved to be equally difficult, the study said. The absence of a physical front desk also made it challenging for staff to check patients in and out, schedule follow-up appointments and collect co-pays.

Hansel commended the team at EPIC-NOLA for what she described as the clinic’s “innovation, responsiveness and dedication to individuals and their families experiencing psychosis. This population is a very difficult population to engage into treatment, even during normal times.”

But whether remote therapy is preferable over in-person treatment remains to be seen. “I think preference may be more influenced by patient/client choice,” Hansel said. “Youth tend to be more comfortable with telehealth services and given that young adulthood is a critical age for early psychosis intervention, telehealth services are unlikely to go away.”