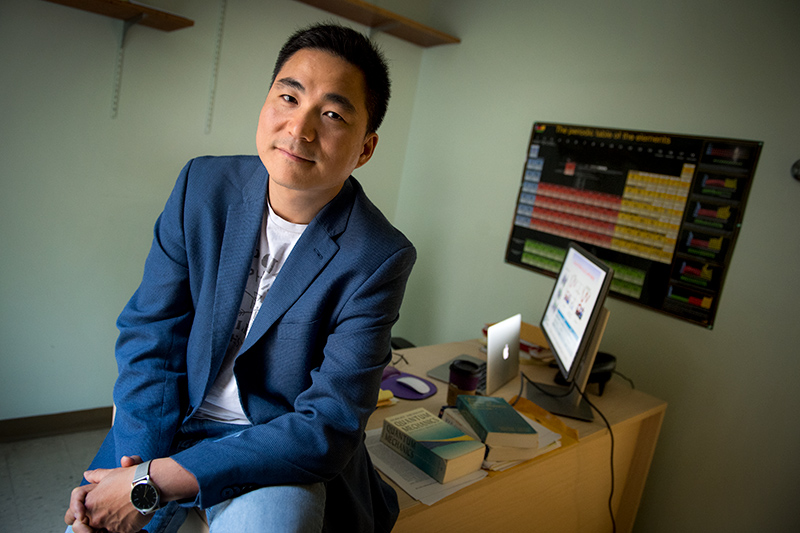 Jianwei Sun is an assistant professor in the Tulane Department of Physics and Engineering Physics. (Photo by Paula Burch-Celentano)

A superconductor is a material that, when cooled to a temperature of near absolute zero (-459˚F), has no electrical resistance and allows electricity to flow through it without any loss of energy. Beyond the potential for energy savings, superconducting materials have magnetic properties that can be used to build levitating bullet trains, MRI scanners and other technologies.

But scientists have long been puzzled by the fact that material has to be so cooled, an expensive process, in order to become a superconductor. Since the mid-1980s, new materials have shown the ability to become superconductors at higher but still very cold temperatures. However, little is known about the process, thus limiting the ability to create material that superconducts at room temperature, which requires little costs.

“There is still little understanding of the microscopic mechanisms that give rise to new higher temperature superconductivity and, without this understanding, the progress to creating room temperature materials has been restricted to a slow trial-and-error experimental search,” said Jianwei Sun, an assistant professor in Tulane University’s Department of Physics and Engineering Physics.

Sun published his study in the open-access journal Communications Physics. He conducted the study with Tulane colleagues James Furness and Yubo Zhang along with researchers at Northeastern University and the Lappeenranta University of Technology in Finland.

Sun’s group at Tulane uses efficient computer simulations to understand the origins of superconductivity “right down at the scale of electrons themselves” at an unprecedented accuracy level, applies the simulations to real-world problems and even designs new materials by simulations.

One successful outcome of the Tulane team's effort is the SCAN density functional, which Sun developed in collaboration with colleagues at Temple University. It is hoped that this physically-sound, wholly new mathematical model will allow the researchers to better probe the microscopic motion of electrons in superconducting materials.