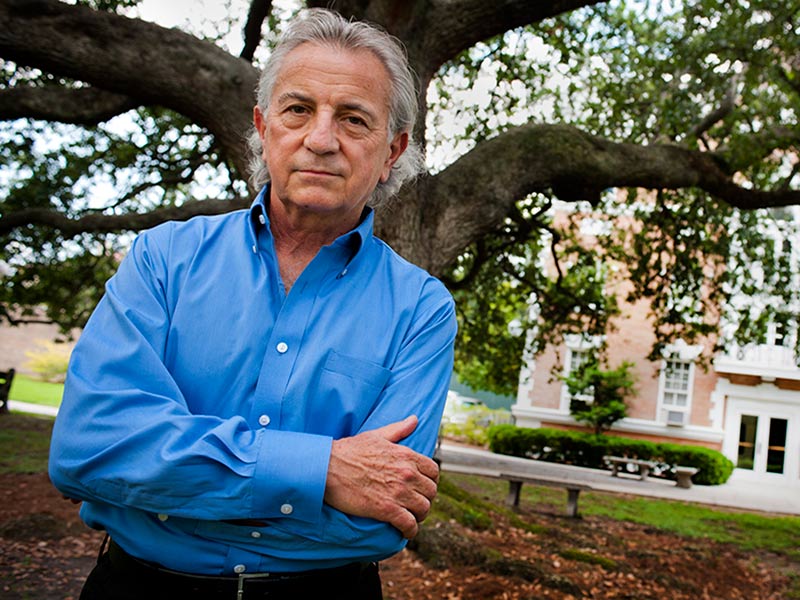 Charles Figley, director of the Tulane Traumatology Institute, is one of three experts who will appear on this week's live-stream "Championing Mental Health" about the mental health problem in the military. (Photo by Paula Burch-Celentano)

Those are just a few of the mental health issues that members of the military, both veterans and active-duty personnel, experience every single day.

Charles Figley, director of the Tulane Traumatology Institute at the Tulane University of Social Work and co-author of the upcoming book Psychiatric Casualties: How and Why the Military Ignores the Full Cost of War will address those topics and more Wednesday, March 31 as part of a live-stream panel discussion in support of Military Caregivers Month.

The most sane and kind thing we can do is eradicate the mental health stigma both in our military and, by extension, society overall."

Beth Dolan, producer of the upcoming documentary "Stranger At Home."

“Championing Mental Health” will feature clips from the soon-to-be released documentary “Stranger At Home: The Untold Story of American Military Mental Health.” The documentary and the live-stream will feature Figley and his co-author, PTSD expert Mark Russell. Steven Elliott, who was involved in the friendly fire incident that killed former NFL star-turned-Army Ranger Pat Tillman in Afghanistan in 2004, will also be on the panel. All three are military veterans.

The live-stream, the first in a series, will air on Facebook at 6 p.m. (CST). Viewers do not need to be on Facebook to watch. Click here to tune in.

Beth Dolan, producer of the documentary and host of “Championing Mental Health,” said the project was born out of her team’s desire to use the film’s upcoming release as a conversation starter for the timely and important topic of mental health.

“There is no place for stigma — the weapon, unfortunately, that the American military still uses as part of their outdated policies regarding PTSD and other war stress injuries,” she said.

Figley said the documentary supports the thesis in his book about the extent of the mental health problem in the military. The book Psychiatric Casualties: How and Why the Military Ignores the Full Cost of War will be released July 1 by Columbia University Press.

“This is one of the most ambitious efforts of supporting our thesis we discuss in Psychiatric Casualties, Figley said. “Those who experience war trauma are in the majority of those who experienced (war),” Figley said. “These and all war veterans deserve the respect and support from all of us, not to mention help in the form of psychological first aid to address their hidden injuries of war.”

Figley and the other panel members will address a wide range of issues associated with the mental health struggles of military veterans, including homelessness, incarceration and suicide. They will also discuss the essential support role that family plays in the traumatic injury recovery process.