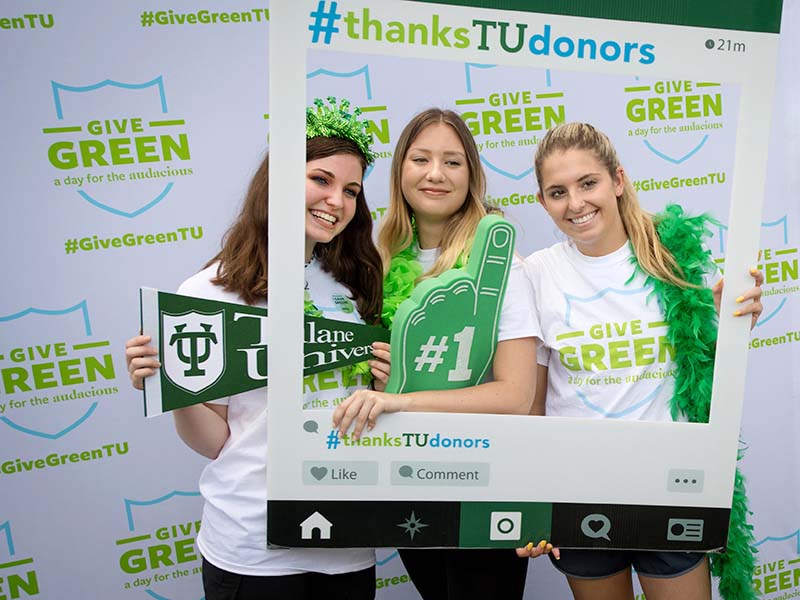 A record amount of donors contributed more than $130 million to Tulane University in 2018-19, including more than $780,000 in 24 hours during the annual Give Green event. (Photo by Jennifer Zdon)

For the third straight year, Tulane University has posted a record-setting fundraising pace, inspiring an unprecedented 25,221 donors to give more than $130 million in the fiscal year 2018-19, second only to last year’s total of $150 million.

This fiscal year’s fundraising totals pushed Tulane past the billion-dollar mark of the Only the Audacious: The campaign for an ever bolder Tulane, the most ambitious campaign in the history of the 185-year-old institution. Tulane has currently raised $1.04 billion toward its goal of $1.3 billion. So far, nearly $250 million of the campaign’s overall commitments will support innovative research that ranges from combating infectious diseases to the latest breakthroughs in brain science.

Increasing scholarship funding in order to make a Tulane education available to any qualified student regardless of their economic background is a major priority of the campaign. To that end, a total of 228 endowed and current-use scholarships and fellowships have been created since the launch of the campaign in December 2017. The percentage of first-generation students in Tulane’s incoming class has also increased by approximately 28 percent since 2017.

“We raise funds to support today's most advanced research and teaching, preparing tomorrow’s leaders to address society’s most intractable problems.”

“While excitement is building at Tulane as we near our goal, the success of this campaign will have the greatest impact beyond our campuses,” Tulane President Mike Fitts said. “We raise funds to support today's most advanced research and teaching, preparing tomorrow’s leaders to address society’s most intractable problems. Our success would not be possible without our hundreds of campaign volunteers across the country led by co-chairs Catherine D. Pierson, Hunter Pierson, Phyllis Taylor and Richard Yulman.”

In addition to expanding the university’s pioneering research and increasing scholarships and financial aid to attract the best students from across the globe, the goals of Only the Audacious are to retain and recruit the best faculty and build a student experience that emphasizes innovation, firsthand research experiences and learning through civic engagement.

This year’s fundraising success was boosted by events such as the second-annual day of giving, Give Green, which raised more than $780,000 in 24 hours. Donors from all over the world – and all 50 states — contributed more than 3,000 gifts and raised 70 percent more than the inaugural Give Green in 2018.

Donors also gave more money to the Tulane Fund than ever before, with 21,659 donors giving $14,534,536. The annual fund is the university’s largest source of unrestricted support and helps provide funding for programs and services that are critical to the university, such as the creation of digital design laboratories, student travel for conferences, research grants and stipends, laboratory renovations and community medical screening services.

“This was another tremendous year for Tulane University, and I applaud the efforts of everyone involved,” Yulman said. “The success of the Only the Audacious campaign will allow Tulane to continue to attract the brightest and most accomplished students from around the world, pursue top faculty and staff and enhance the overall campus experience.”

Among this year’s most notable contributions were a pair of $5 million gifts for Presidential Chairs, which were donated by Taylor, a graduate of Tulane Law School and campaign co-chair and the Tulane alumni couple of Marcela Villareal de Panetta and Bernard J. Panetta II. Taylor’s gift will create a chair in an interdisciplinary area of study, while the Panetta’s gift established a Presidential chair to support a professor associated with the Tulane Brain Institute.

The purpose of the Presidential Chairs is to attract some of the world’s most renowned faculty members in areas such as biomedicine, coastal restoration, global health and fields not yet explored. These faculty members will embark on a pursuit of teaching and research that crosses multiple disciplines and transforms the world.

“It is both exciting and inspiring to see such a large number of alumni, parents, students, faculty, staff and friends generously giving at these record levels and having a chance to express their love for Tulane through their philanthropy,” said Ginny Wise, senior vice president for advancement.