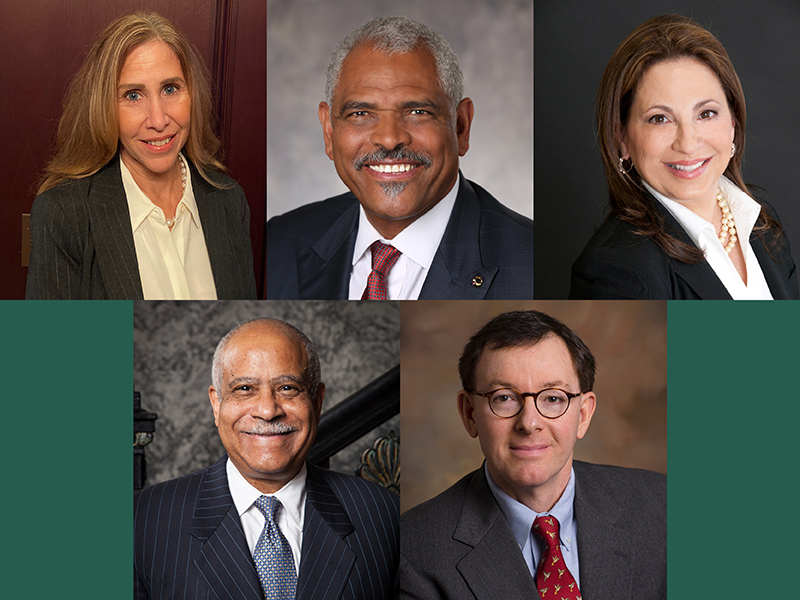 Five new members have joined the Board of Tulane, the university’s main governing body.

“These individuals have an incredible legacy of commitment to and support of Tulane and numerous other institutions across the country,” Tulane President Michael A. Fitts said. “Through their love and commitment to Tulane, I know that they will provide the best counsel and leadership for our university.”

“Through their love and commitment to Tulane, I know that they will provide the best counsel and leadership for our university.”

Wayne J. Lee, who served on the Tulane board from 2004 to 2016, was also elected to serve an additional term.

New board member Michelle Diener said her decision to join the board was driven by a desire to give back to an institution that has long been a part of her family’s story.

“I am so proud to join the board of a university that has meant so much to three generations of my family, especially at this exciting time. Our campaign is achieving new heights, our office of admission is setting records each year and our entire university has managed the COVID-19 pandemic as successfully as possible. Tulane has given so much to me and to my family that it's a pleasure to serve in a leadership role and return the favor,” Diener said.

The Dieners recently funded the Diener Family Endowed Fund for Student Success in support of the Academic Success Center at Tulane.

Diener serves as the treasurer of both the Miami Children’s Museum and the Greater Miami Jewish Federation and is on the board for other Jewish educational and social charities as well. She is the former CFO of Hotel Reservations Network, the predecessor to Hotels.com.

Tulane’s local and worldwide impact is a main focus of new board member Arnold Donald.

“As a native of New Orleans and a global citizen, I am keenly aware of the amazing legacy of Tulane University and its important impact in the region and the world community in its 186-year history as a university. I am honored to now join this legacy as a member of the Board of Trustees,” Donald said.

Donald received his Bachelor of Arts degree in economics from Carleton College, a Bachelor of Science degree in mechanical engineering from Washington University in St. Louis and his MBA from the University of Chicago.

Donald is currently a board member for the Greater New Orleans Foundation, Washington University, The Business Council, Missouri Botanical Garden and Carleton College and serves as the North American Chair of the World Travel & Tourism Council. He previously served as President and Chief Executive Officer of the Juvenile Diabetes Research Foundation International.

Suzanne Grant feels that her experience as a Tulane parent will assist her in her new leadership role.

“It is an incredible honor to be appointed to the Board of this wonderful university. As a parent of a graduate, I was able to experience how the school supports the student body and prepares them for life after graduation. I have been so impressed by the caliber of the faculty, the staff and the students, especially in the way the school has adjusted to this COVID-19 era. I look forward to playing a role in the continued success of Tulane,” said Grant.

The Grants were members of the Parents Council at Tulane from 2015-2019 and have funded several projects in the Tulane School of Liberal Arts Jewish Studies program.

Grant has held leadership positions with Hillel International and numerous other faith and service organizations. The Grants formed the “I Can Do Great Things” foundation to support a range of social initiatives related to education and projects that strengthen communities.

Grant, who received an MBA from the Wharton School of the University of Pennsylvania, has been the chair of the board of trustees at the Delaware Public Employees' Retirement System since 2012.

Wayne Lee looks forward to returning to the Board of Tulane for another term.

“Tulane has undergone many changes since its birth and many more since my days as a student. It is a stronger and better institution because of those advancements, and I believe there are more to come. I am grateful to have the opportunity to serve another term on the board of administrators and work with President Fitts and the board through these exciting but challenging times,” said Lee.

Lee is a member of the law firm of Stone Pigman Walther Wittmann, LLC. He chairs the firm's Commercial Litigation Practice Group. Lee received his Bachelor of Arts from Tulane’s College of Arts & Sciences and his Juris doctor from the School of Law.

As a board member Donald Peters said that he wants to make sure that the same opportunities he had as a Tulane student are available to others.

“Graduating from Tulane opened many doors for me, and I am delighted to become a trustee and help the university fulfill its important mission,” said Peters.

Peters and his family have been longtime supporters of Tulane Athletics. They have also supported the Cudd Academic Center renovation and the Newcomb Art Museum.

Peters graduated from Tulane’s College of Arts and Sciences with a Bachelor of Arts in economics. He received his MBA from the Wharton School at the University of Pennsylvania. Peters is a portfolio manager at T. Rowe Price Associates. He has been with the firm since 1993. He previously served as a portfolio manager at Geewax, Terker, and Company.