Two prominent attorneys named to Board of Tulane 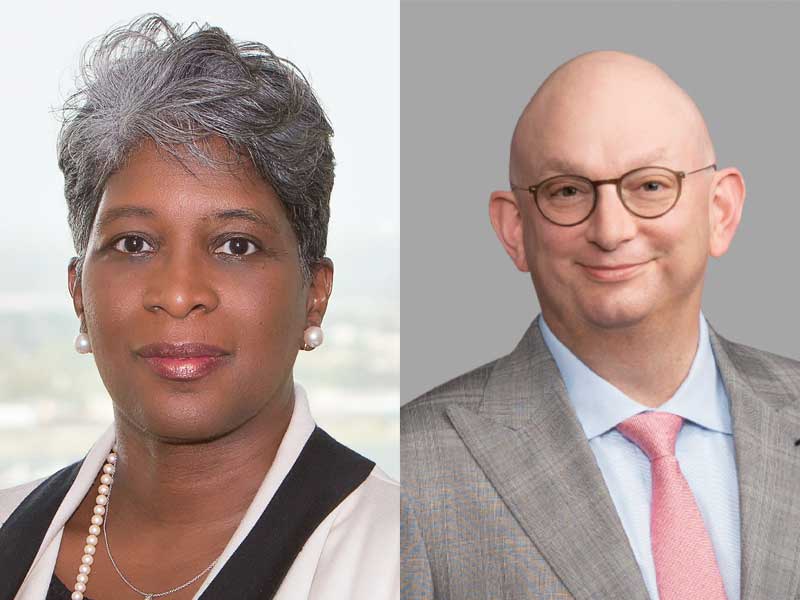 Attorneys Kim Boyle (left) and Michael Rubenstein were each named to the Board of Tulane, the university’s main governing body, and began their appointments on July 1.

Kim Boyle, one of New Orleans’ top lawyers and Michael D. Rubenstein, a Tulane graduate and leading attorney based in Houston, have been named to the Board of Tulane, the university’s main governing body. The board members began their appointments on July 1. Boyle previously served on the Tulane board from 2009-2021 and was elected to an additional term. Rubenstein will serve as the new Tulane Alumni Association member of the board.

“Tulane is experiencing incredible momentum in everything from admissions to research funding to physical expansion,” Tulane President Michael A. Fitts said. “We need the insight and guidance from leaders such as Kim Boyle and Michael Rubenstein to ensure that we leverage our current success to bring Tulane to ever greater heights in education and in research that impacts our community and our world.”

In addition, Boyle is a member of the Albert and Tina Small Center Advisory Board, and previously served on the Presidential Commission on Racial Equity, Diversity and Inclusion and the Campus Recognition sub-committee. In 2019, she established the Ernest and Connie Boyle Scholarship Endowed Fund to support Tulane students from the greater New Orleans area, especially graduates of New Orleans public high schools.  She earned a bachelor’s degree from Princeton University, on whose Board she previously served, in 1984 and her law degree from the University of Virginia in 1987.

“I have seen how education changes lives on multiple levels. It expands the way we think about the world and other people. It opens our eyes to look at things from a broader perspective. Tulane is an asset for our city and is home to a multitude of great faculty, staff and student minds. I look forward to another term and continuing to expand our horizons through honest conversations and thoughtful solutions,” Boyle said.

Rubenstein has served on the boards of Teach for America Greater New Orleans Region, New Orleans Speech and Hearing Center, Congregations Temple Sinai and Beth Israel, The Selwyn School and the Young Leadership Council. He also served as the chair of the steering committee of the American Bar Association’s Death Penalty Representation Project. He is listed in The Best Lawyers in America and has frequently appeared in Texas Super Lawyers.

Rubenstein is a current member of the Law Dean’s Advisory Board and the board of advisory editors of the Tulane Law Review. He has been a member of Tulane’s National Campaign Council since 2017, is a past president of the Tulane Alumni Association Board of Directors, has served on the Alumni Admissions Committee and chaired his 25th and 30th reunions.

In 2018, he established the Michael D. Rubenstein Endowment for Legal Excellence, a fund used to support Tulane Law School.

“Tulane has always been very important to me. It is a great privilege to represent the alumni on the Board of Tulane. The university is on a great path, and I look forward to being a part of its future,” Rubenstein said.