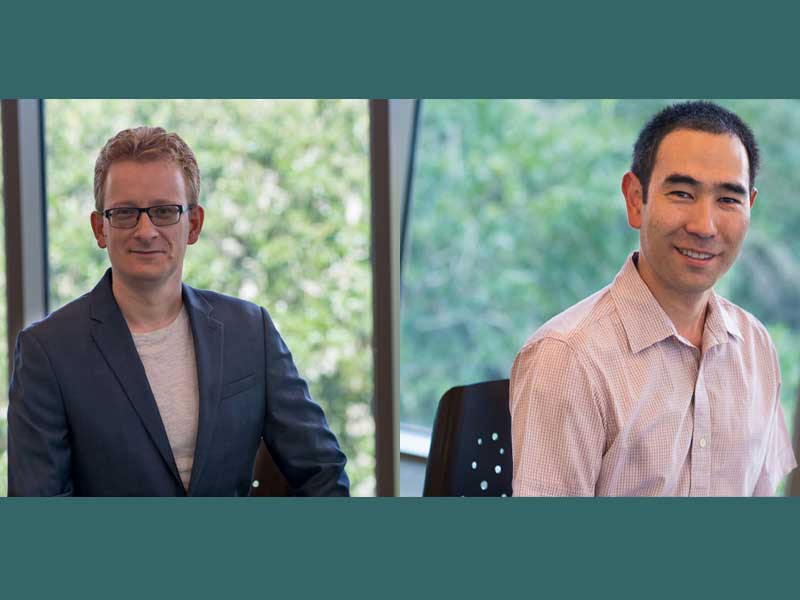 Tulane University’s School of Science and Engineering has been awarded a $1 million grant from the W. M. Keck Foundation to do what no physicist has ever done before: see through opaque matter using superoscillations of light in a time-domain spectroscopy lab.

That phrase might be difficult for the layperson to grasp, but its results could eventually transform a wide range of fields and technologies, from wireless communications and remote sensing to X-rays and security screenings.

The Keck grant will fund the work of Dr. Diyar Talbayev, an associate professor in the Department of Physics and Engineering Physics, along with Dr. Denys Bondar, an assistant professor in the department. Their proposal is titled “Optical Superoscillations in Time Domain: ‘Seeing’ Through Opaque Matter and Wavelength Conversion Without Nonlinearity.” Talbayev is the primary investigator, while Bondar is the co-investigator.

“The Keck Foundation is renowned for funding very creative and ‘out of the box’ ideas, and this innovative endeavor certainly qualifies as one.”

- Kimberly Foster, dean of the School of Science and Engineering

“Once again, through the generosity of the Keck Foundation, Tulane is on the leading edge of invention and discovery,” Tulane President Michael Fitts said. “In this era when so much human interaction, culture, commerce and discovery is driven by technological advancements, a breakthrough such as the one being pursued by these researchers could have far-reaching global impacts, improving and even saving lives worldwide.”

“The Keck Foundation is renowned for funding very creative and ‘out of the box’ ideas, and this innovative endeavor certainly qualifies as one,” said Kimberly Foster, dean of the School of Science and Engineering. “It’s a promising partnership between two Tulane colleagues with distinct strengths — in this case a computational scientist and an experimentalist — working together on a complex problem. I’m fascinated by this project, which should lead to very exciting results and demonstrate the kind of synergies that we’re focused on developing through collaborative research at Tulane.”

Superoscillations of light have never been explored in the time domain, largely because they can’t be measured by conventional light sensors like the human eye or cameras. In producing and studying time-domain superoscillations for the first time, Tulane’s project aims to complete a theoretical experiment that has gone unsolved since it was first proposed 30 years ago by Israeli physicist Yakir Aharonov.

The colors of light differ by their wavelength, which is the distance between two neighboring crests of an electromagnetic wave. For this experiment, the Tulane team will be using wavelengths close to 0.3 millimeter, which occupy the far-infrared region of the light spectrum.

“Superoscillation refers to a ‘fictitious’ wavelength of light that sometimes can be found in a beam of light made of several much longer wavelengths,” Talbayev said. “This fictitious wavelength can be measured over brief time intervals and can pass through matter that would absorb — or be opaque to — the light containing an actual wavelength, or color. Even though the superoscillation is made of a fictitious wavelength, this light can carry information, as in optical communications or in optical spectroscopic detection of substances.”

The Tulane team aims to convert this fictitious wavelength into an actual wavelength of light in a highly technical precision feat that Talbayev likens to opening and closing a window at just the right moment. That challenge lies at the heart of the experiment that Aharonov first proposed in 1991.

This project also could enable safer alternatives to ultraviolet light or even X-rays, both of which are used in numerous applications but can cause cancer and other harm to humans through prolonged exposure.

“In addition to significantly enhancing communication and sensing technologies, these new light sources may also open entirely new scientific frontiers,” Bondar said. “For example, one could realize an aspect of the alchemist’s dream of making lead look like gold — through on-demand modulation of the properties of materials by light.”

The $1 million grant from the Keck Foundation will provide critical support for a postdoctoral fellow and two graduate students; equipment including a spectrometer; and research supplies and travel expenses.

Based in Los Angeles, the W. M. Keck Foundation was established in 1954 by the late W. M. Keck, founder of the Superior Oil Co. The Foundation’s grant making is focused primarily on pioneering efforts in the areas of medical research and science and engineering. The Foundation also maintains a Southern California Grant Program that provides support for the Los Angeles community, with a special emphasis on children and youth. For more information, please visit www.wmkeck.org.