What bats can teach us about stopping the next pandemic 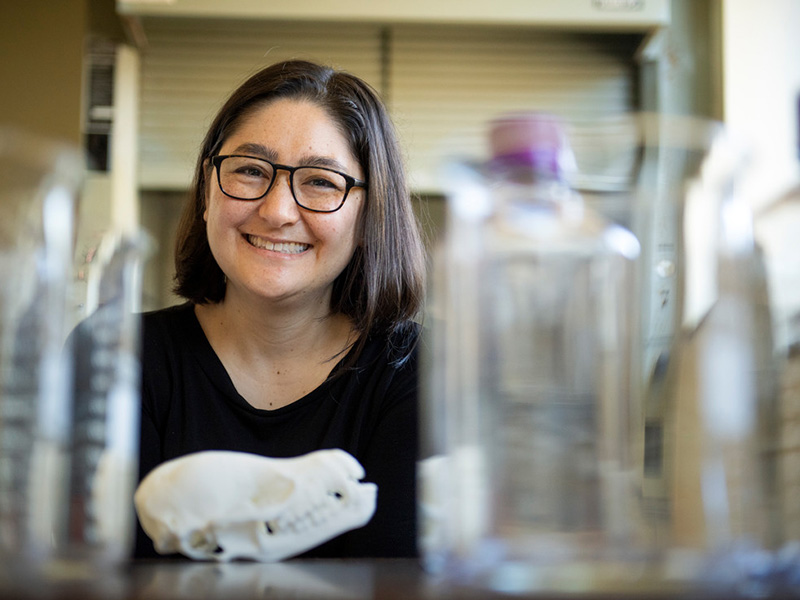 Tulane researcher Hannah Frank was part of team of scientists looking at the complex connections between bats and coronaviruses, and how they evolved together. (Photo by Rusty Costanza)

Why are bats often linked to incubating coronaviruses such as those behind COVID-19, SARS and other highly contagious respiratory diseases?

A new Tulane University study suggests that the link between bats and coronaviruses is likely due to a long-shared history, and that their genetic information can help us prevent and manage future pandemics.

Hannah Frank, PhD, a bat expert in the Tulane University School of Science and Engineering, led the effort in collaboration with David Enard (University of Arizona) and Scott Boyd (Stanford University).

“This study gives us greater insight into how mammals, particularly bats, have evolved with coronaviruses. It also highlights broad patterns in susceptibility that may prove useful for managing this and future pandemics.”

“We found that bats have been under unusual pressure from coronaviruses compared to other mammals, supporting the idea that bats are rich sources of coronaviruses and may yield insights for future prevention or treatment,” said Frank, an assistant professor in the Tulane Department of Ecology and Evolutionary Biology.

Published in the Proceedings of the Royal Society B, the Royal Society’s flagship biological research journal, the study was funded by two National Science Foundation grants targeted at better understanding bat immunity and evolution in response to pathogens, especially in the wake of COVID-19.

“Pandemics originating from animals highlight the need to understand how natural hosts have evolved in response to emerging human pathogens and which groups may be susceptible to infection and/or potential reservoirs to mitigate public health and conservation concerns,” Frank said.

In the largest bat and mammal dataset to date, the team investigated an enzyme called angiotensin-converting enzyme 2, or ACE2, the host protein that serves as a receptor for the viruses that cause COVID-19 and SARS. They also studied dipeptidyl-peptidase 4, DPP4 or CD26, which acts as a receptor for MERS-CoV, the virus that causes Middle East Respiratory Syndrome.

Both the ACE2 and DPP4 genes are under strong selection pressure in bats, more so than in other mammals, and in residues that contact viruses.

The study adds to our understanding of the relationship between coronaviruses and mammals, especially bats, and provides diverse data for studies of how host proteins are bound by coronaviruses.

“This study gives us greater insight into how mammals, particularly bats, have evolved with coronaviruses,” she said. “It also highlights broad patterns in susceptibility that may prove useful for managing this and future pandemics.”

Frank cautions that the research shouldn’t cause people to fear bats. They play an important role in our ecosystem, making a significant contribution to pest control, pollinating plants and spreading seeds. The U.S. Wildlife and Fisheries Department estimates that bats eat enough insects to save more than $3 billion annually in crop damage and pesticide costs in the United States.