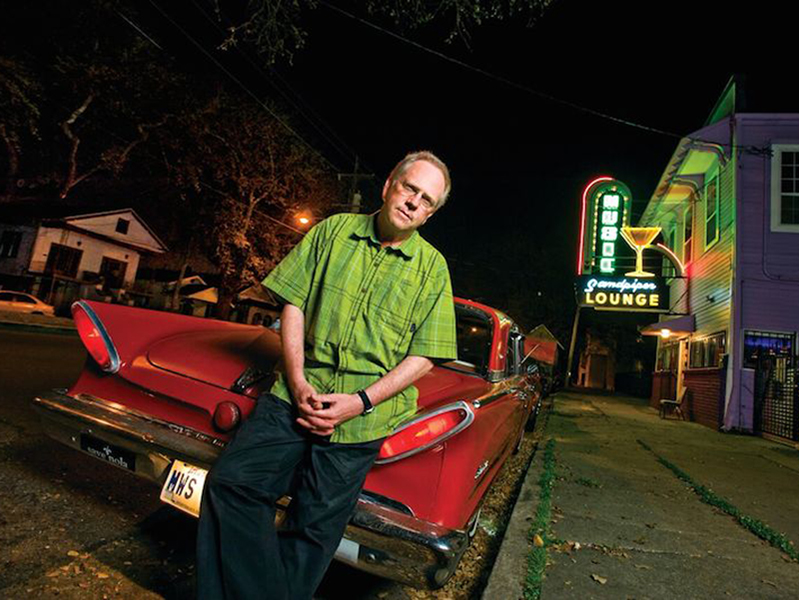 Nick Spitzer is a folklorist recognized for his work with community-based cultures of the Gulf South, cultural creolization, American traditional music, documentary arts and public policy. He is the producer of public radio’s American Routes, a two-hour program devoted to vernacular music and cultures, heard on over 300 stations by up to a million weekly listeners, now in its 20th year. Spitzer is a professor of anthropology at Tulane University where he has taught since 2008. Prior to that he was Zemurray Professor of Cultural Conservation in the College of Urban & Public Affairs at the University of New Orleans. Spitzer holds a B.A. cum laude in anthropology with a minor in folklore from Penn (1972), and an M.A. (1974) and Ph.D. in anthropology & folklore with a minor in English from the University of Texas at Austin (1986). His M.A. thesis was “’I Got the World in a Jug’: African-American Women's ‘Classic Blues.’”  His Ph.D. dissertation was “Zydeco and Mardi Gras: Creole Identity and Performance Genres in Rural French Louisiana.”

Dr. Spitzer researched and edited Louisiana Folklife: A Guide to the State (1985), a Louisiana state document, as well as the Mississippi Delta Ethnographic Overview (1979) for the National Park Service. Spitzer’s scholarly writings appear in American Anthropologist, Journal of American Folklore, Encyclopedia of Southern Culture and Encyclopedia of World Cultures. He co-authored Blues for New Orleans: Mardi Gras and America’s Creole Soul (2006) on Penn Press. His most widely quoted articles in scholarly use are "Cultural Conversation: Metaphors and Methods in Public Folklore" (1992, 2007. Public Folklore, pp. 77-102, edited by Robert Baron and Nicholas R. Spitzer, Smithsonian Institution Press); "Rebuilding the  'Land of Dreams' with Music” (2006 in Rebuilding Urban Places After Disaster: Lessons from Hurricane Katrina.  Edited by Susan Wachter and Eugenie Birch, University of Pennsylvania Press); and “Creolization as Cultural Continuity and Creativity in Postdiluvian New Orleans and Beyond“ (2011 in Cultural Creolization as Cultural Creativity. Edited by Robert Baron and Ana Cara. University Press of Mississippi). The latter is also widely used at http://www.southernspaces.org/2011/creolization-cultural-continuity-and-creativity-postdiluvian-new-orleans-and-beyond.

Spitzer founded the Louisiana Folklife Program in 1978. His work as State Folklorist generated research, programs, and publications that brought new understanding to traditional cultures, including the well-regarded Louisiana Folklife Pavilion at the 1984 World’s Fair. From 1985-89, Spitzer was the senior folklife specialist at the Smithsonian’s Center for Folklife and Cultural Heritage.  He curated programs at the Festival of American Folklife and produced cultural documentaries for Radio Smithsonian. As a commentator on culture for NPR’s All Things Considered (1989-2000), he extended the human conversation about the aesthetic and cultural lives of communities.

Since 1998 American Routes, produced by Spitzer with Tulane University and distributed by PRX - Public Radio Exchange, has been supported consistently by the National Endowment for the Arts and the National Endowment for the Humanities.  In 2002 Spitzer received the Benjamin Botkin Lifetime Award in Public Folklore from the American Folklore Society. He was Mellon Humanities Professor at Tulane in 2004 and named a Fellow of the American Folklore Society Fellow in 2005.  Spitzer was Louisiana Humanist of the Year for recovery work after Hurricane Katrina in 2006. He received a Guggenheim Fellowship in 2007 to support continued work on traditional creativity in Creole communities. The 2013 James Williams Rivers Prize recipient for contributions to Louisiana culture at the Center for Louisiana Studies and the Spark Professorship of the School of Arts at the University of Louisiana, Spitzer teaches ethnography of Gulf South cultures and public culture at Tulane. He has lectured widely in the U.S., Europe, and China on the role of culture as an agent in recovery from natural, manmade, economic and political catastrophes. He received a Taiji Traditional Music Award for cultural documentation and dissemination from China’s National Conservatory of Music. In 2013 Nick co-convened the seminar: "Intangible Cultural Heritage Policies & Practices for Safeguarding Traditional Cultures—Comparing China and the United States" at the School for Advanced Research. From these conversations grew the American Routes Abroad tours of jazz, cowboy, Cajun, gospel and Tex-Mex music in China (2014-16) with lectures and seminars on cultural policy and cultural creolization and globalization.

Over four decades Spitzer has continued interviews and fieldwork with rural and then urban Louisiana African French Creoles and their expressive culture after his 1986 dissertation in long-term and new migrant communities of East Texas, Houston’s 5th Ward, South Central Los Angeles and the San Francisco Bay Area. He made an ethnographic film about Creole cultural expression, created public radio features for both local and national public radio with Creole musicians and other community members such as family matriarchs, farmers, cowboys, traiteurs (healers), nightclub owners, priests, etc. He presented Creole musicians in festival and concert settings outside their communities at the Library of Congress (1986), the National Folk Festival (1989-2000), Carnegie Hall (1989-90) at a festival in the Creole-speaking Seychelles islands (1989). His work as public folklorist, curator, artistic director, and radio cultural producer created unprecedented collaborations with Creole musicians and other community leaders to build a dialog or “cultural conversation” as to how their ethnicity and expression might be represented in new performance and media contexts to wider audiences, and also to hear how the cultural revival and interest back the African-French Creole communities from the 20th to the 21st Century. He was able to follow the careers of younger zydeco musicians with rap-inflected styles and to articulate wider concepts of cultural creolization in theoretical writings. His public policy discussions from Washington and Berlin to Beijing were accompanied by a wide range of new contexts for cultural performance in national and global concert settings and media.  Since Hurricane Katrina  Spitzer’s focus has been on the local revival of Creole consciousness through a variety of Creole community-designed means such as festivals and museums, heritage groups, school curricula, and media. His public cultural conversation with Creoles addresses cultural revival and representation in both the monde Créole (small community) and a creolizing world. His work informs emerging national and global models of cultural creolization and cultural resilience.

Creolization as Cultural Continuity and Creativity in Postdiluvian New Orleans and Beyond - November 28, 2011