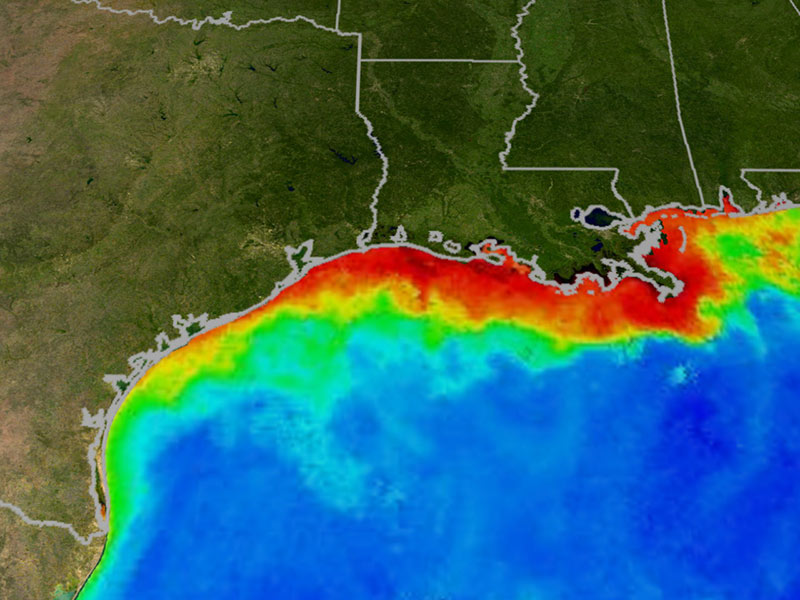 Five finalists have been selected by National Advisory Committee for its $1 million Dead Zone Challenge. (Photo from NASA)

The National Advisory Committee for the Tulane Nitrogen Reduction Challenge has selected five finalists for its $1 million cash prize, which will be awarded to the team that presents the best solution to combat hypoxia – the deadly deficiency of oxygen that creates annual “dead zones” in the world’s lakes and oceans. Such dead zones kill marine life and threaten the economies of coastal regions, including those along the Gulf of Mexico, home to the world's second-largest dead zone.

The purpose of the challenge is to find in-field solutions to hypoxia that reduce nitrogen runoff from crop fertilizers into rivers. Such runoff from the nation’s farmlands is considered the primary cause of annual dead zones.

"We are fortunate that these top five teams represent diverse innovations from across the world."

“Narrowing down to just five finalists was a very competitive process because of the quantity and the quality of submissions received,” Challenge Director Leah Berger Jensen said.  “We are fortunate that these top five teams represent diverse innovations from across the world. We are at a critical stage of the Challenge as we venture into Phase 2- the in-field trial - and we look forward to observing these teams implement their solutions into practice on the farm.”

Moving ahead into Phase 2, the five finalist teams will be provided a plot of farmland in Tensas Parish in northeast Louisiana to field test their innovation. The winning team will be judged based on the impact their solution has on crop yield, how well their solution manages nutrient runoff and how much it costs.  The $1 million grand prize will be awarded in December 2017.

The Tulane Nitrogen Reduction Challenge is funded by Mrs. Phyllis Taylor, president of the Patrick F. Taylor Foundation and a member of the Board of Tulane, and the prize is a program within the Phyllis Taylor Center for Social Innovation and Design Thinking at Tulane University.