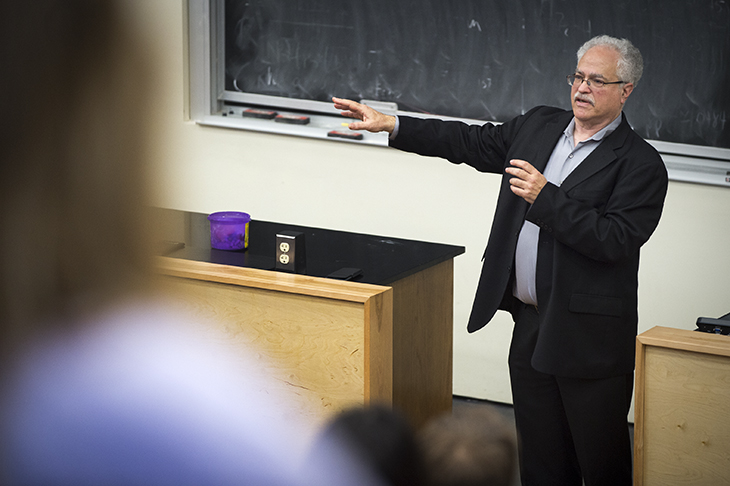 University of California–Santa Barbara professor George Lipsitz explains how “oppositional conjuncture” can benefit universities and society at large, during his lecture, “No Ordinary Time: Why Engaged Scholarship Matters Now” on Wednesday (April 6). (Photo by Paula Burch-Celentano)

People who buy into the old saying “If you aren’t mad, then you’re not paying attention” have many reasons to be outraged these days. Even so, it’s a “great” time to be alive, said author and University of California–Santa Barbara sociology professor George Lipsitz, who gave a lecture called “No Ordinary Time: Why Engaged Scholarship Matters Now” on the Tulane University uptown campus Wednesday (April 7). The address was sponsored by the Provost’s Office and the Department of Communication.

Lipsitz borrowed an idea from the Rev. Martin Luther King Jr.’s “I’ve Been to the Mountaintop” speech when he declared the mid-2010s a moment of “oppositional conjuncture” — a moment of history when life appears so bleak that people rise up and “refute an unlivable destiny [and] imagine things that were beyond the life that was imagined for them.” And engaged scholarship can address those moments.

“It’s a time suffused with hate, hurt and fear. It’s a time in which we’re witnessing and experiencing the effects of the systemic breakdown of key institutions — the economy, the environment, the educational system. We have our hands full,” he said.

“We’re ... experiencing the effects of the systemic breakdown of key institutions — the economy, the environment, the educational system.”

Moments of oppositional conjuncture allow people the chance to fight back, so engaged scholarship at the university level becomes critically important. Challenging the audience to rethink the purpose of a university education as more than just laying the groundwork for a career, Lipsitz argues that good scholarship comes from accompaniment — actually working within fields of study instead of just observing them. Lipsitz works with the National Fair Housing Alliance, for example, and community organizations that give voice to people such as the homeless and immigrants. Ideas and solutions to social problems are often hidden in these unexpected spaces, he said.

Quoting W. E. B. Du Bois, Lipsitz encouraged academics and others to see a university as “that instrument of fine adjustment between life as it’s lived and knowledge of that life. That adjustment forms the basis of civilization.”