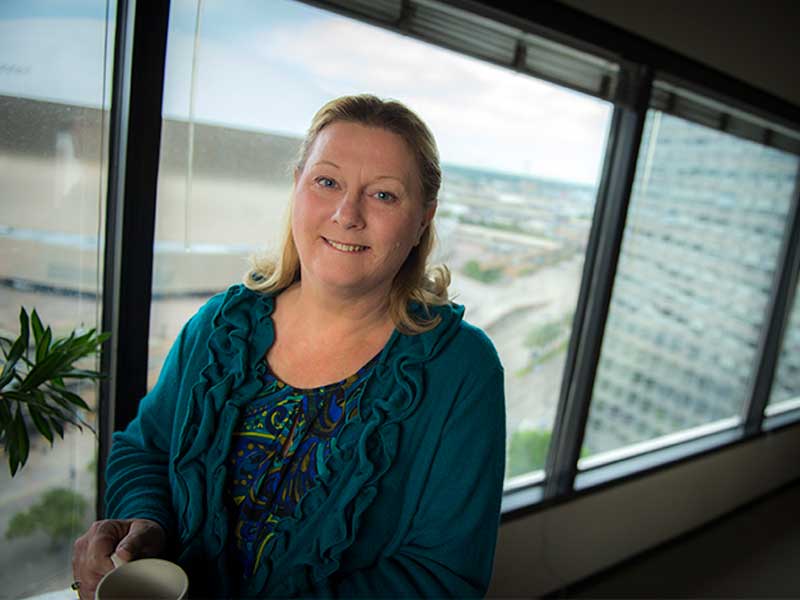 Despite her life's hurdles, Suzie Craig earned a degree from the Tulane University School of Continuing Studies at the 2016 Unified Commencement Ceremony on Saturday (May 14) in the Mercedes-Benz Superdome. (Photo by Paula Burch-Celentano)

Between 2005 and 2012 Suzie Craig’s life began veering off course. During those years, she dealt with displacement due to Hurricane Katrina, a divorce, and the death of her father in 2007 followed by the death of her only sibling in 2010. Soon after, she lost the job that she’d held for the last 12 years.

When faced with two choices — give in to depression or seize the opportunity for a new start — she chose the latter.

On May 14, the culmination of Craig’s life experiences led her to the Mercedes-Benz Superdome where she became a 2016 graduate of the Tulane University School of Continuing Studies.

“I want people to understand that if I can do this, anyone can do this.”

After a 30-year hiatus from college, where she left to become a full-time mother and wife, Craig enrolled at Tulane to pursue an associate of arts degree coupled with a certificate of paralegal studies.

“I started by taking just one class, because I didn’t think I was smart enough to actually do it,” says Craig. “I worked full-time, 40 or 50 hours each week, while taking classes.”

Before enrolling at Tulane, Craig says she found an unexpected support system in 2012 at a new job with the Morris, Lee & Bayle law firm. She believes the firm’s female partners, had a true understanding of her position as a divorced, single mother of two.

In December of 2015, her 23-year-old daughter graduated from college. Six months later, it is her turn.

“I want people to understand that if I can do this, anyone can do this,” says Craig. “It’s never too late.”

New dining options coming to campus
Mid-City hosts annual Bayou Boogaloo
Imagine the Possibilities
Grad is on fast track to being a doctor
The Insider: More than a mortarboard