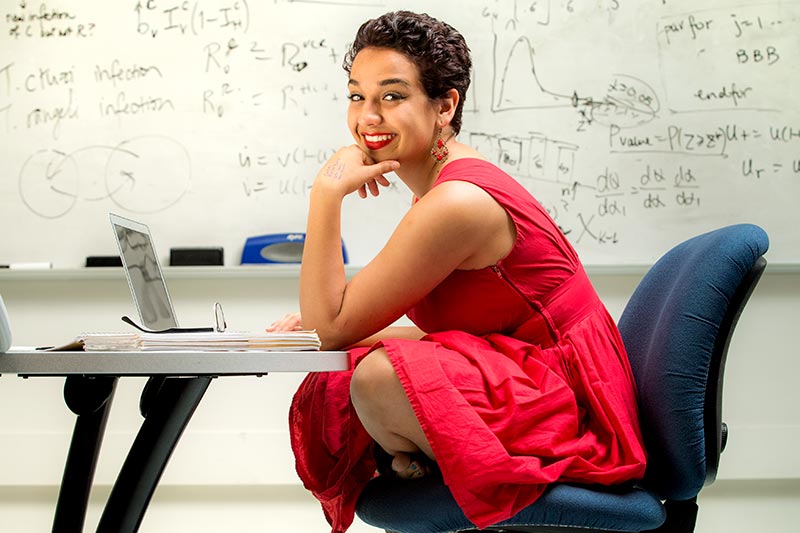 Jessica Conrad is wrapping up her senior year in both the Tulane School of Science and Engineering and the School of Public Health and Tropical Medicine. But the math and public health double major already has one major accomplishment on her record — her work on mathematical modeling behavior change during the Ebola outbreak was published in a new textbook, Mathematical and Statistical Modeling for Emerging and Re-emerging Infectious Diseases (Springer Publishing, 2016).

Behavior change that reduced contact with people infected with Ebola, whether they were alive or dead, changed the course of the epidemic, according to the chapter, co-authored with postdoctoral mathematics researchers Ling Xue and Jeremy Dewar, and mathematician James “Mac” Hyman, who is the Evelyn and John G. Philips Distinguished Professor in Mathematics.

“Talk to your professors. That’s how I ... have been able to publish as a junior.”

The model also includes other outcomes, such as death, and other factors that could affect each stage of a disease. The approach was first used to understand opportunities to impact the HIV/AIDS epidemic.

“This is particularly useful for emerging epidemics,” said Conrad, whose hometown is Santa Rosa, California. “We showed that really what you need when you don’t know what is going on, is behavior change.”

When she came to Tulane, Conrad was more focused on chemistry than public health. Through conversations with her advisers she learned about Hyman’s interest in modeling epidemics. The intersection of public health and math modeling appealed to her, and she asked Hyman to be her adviser and changed her course of study accordingly. She is currently applying for graduate programs in her field.

For other students interested in publishing opportunities Conrad said: “Talk to your professors. That’s how I got these opportunities and have been able to publish as a junior. It’s changed my whole career trajectory.”

The 2017 Commencement ceremony will be streamed live online. Follow us on social media at #tulane17.
Like this story? Keep reading: Math professor awarded for impact on the field