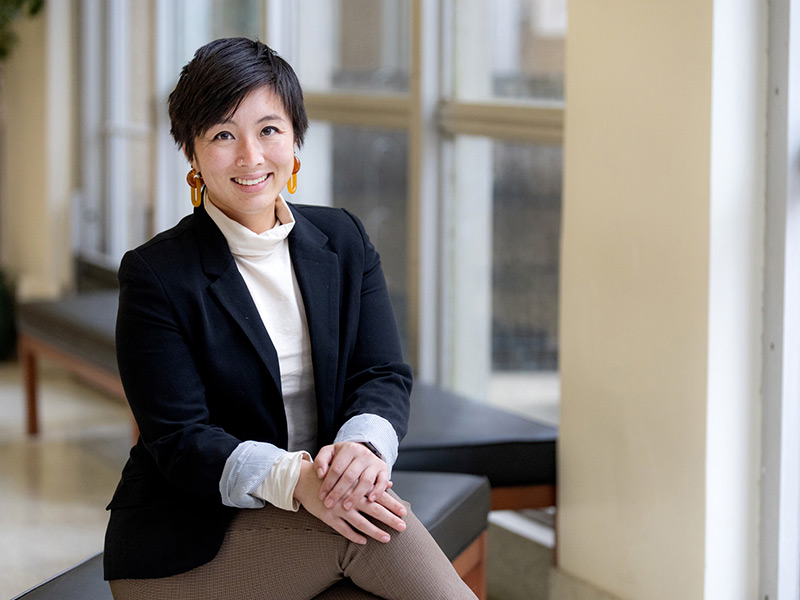 As the student representative to the Association of American Medical Colleges Board of Directors, fourth-year MD/MPH student Jen Hayashi hopes to be a voice for medical students nationwide. (Photo by Rusty Costanza)

Fourth-year MD/MPH student Jen Hayashi hopes to be a voice for medical students. After a two-year Teach For America assignment as a high school science teacher, Hayashi’s interest in education transferred to improving undergraduate medical education. After starting at Tulane School of Medicine, she turned her attention to working on behalf of her fellow students.

First she served as one of Tulane’s three student representatives to the Association of American Medical Colleges (AAMC); these reps, along with reps from other medical schools, comprise a consortium of students that advances AAMC’s mission. As a member of AAMC’s Organization of Student Representatives, Hayashi met students in other medical programs, listened to their concerns and began to learn more about the landscape of medical education, allowing her the opportunity to bring ideas and initiatives from other institutions back to Tulane.

But Hayashi was moved by the opportunity to learn and serve from a greater perspective. Last fall she applied for and was appointed as the student representative to the AAMC Board of Directors. The only student rep on the national board, Hayashi’s two-year term began in Fall 2021.

Hayashi had already worked with Tulane School of Medicine’s student-led Racial and Social Justice in Medical Education committee on initiatives such as addressing some elements of Tulane’s medical curriculum to be actively anti-racist and more equitable. She also worked with other students to create trainings, such as a bystander-intervention training and a case-based learning session on the clinical use of race questioning in order to remove or reduce systemic bias from clinical reasoning.

Hayashi also became involved in the medical school admissions process. “It’s essential to discuss who gets accepted to medical school, why they get accepted, and what kind of biases we have when we look at applications,” she added.

Now, on a national level, she has the chance to work directly with decision-makers from a variety of backgrounds.

“The president of the AAMC, Dr. David Skorton, has been really supportive in amplifying my voice, listening to my ideas,” Hayashi said. “Dr. Alison Whelan, (chief academic officer) at the AAMC, is also doing really incredible work around updating medical education. I've been really inspired working with her … They've all empowered me to have more of a leading role.”

The pandemic has hindered a lot of student bonding over the past years, Hayashi said. “I’d like medical education to evolve around student support … and how we can support people at all levels.”

The San Diego native intends to practice OB/GYN after graduating. She hopes to continue impacting the inequities in health care through continued investment and reform of academic medicine.

“In this current time, one of the reasons I really enjoy doing this work is because medical education is being challenged in a lot of ways that really open the door to rethinking how we do it,” she said. “I feel really grateful for this opportunity.”