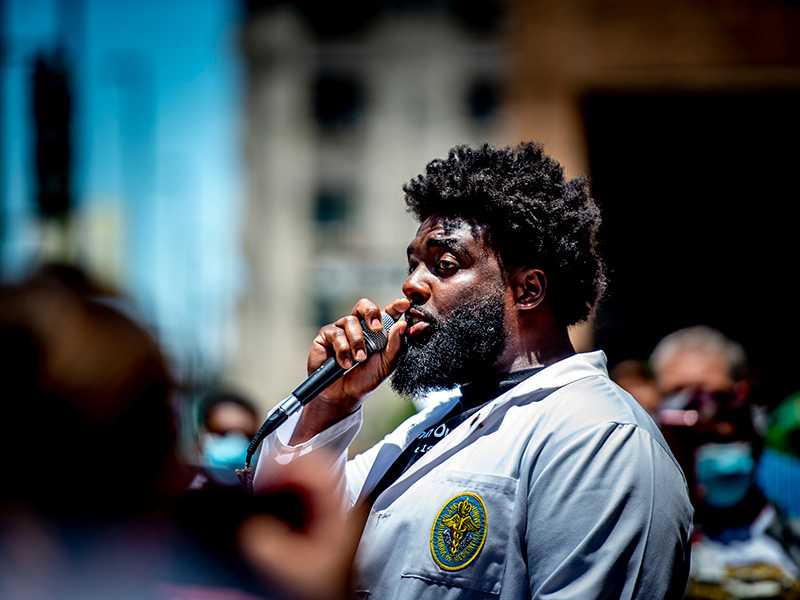 Russell Ledet, PhD, a Tulane School of Medicine student, received a Herbert W. Nickens Medical Student Scholarship for his leadership in working to eliminate inequities in medical education. Ledet’s inspiring journey to become a doctor made national headlines this month. Above, he is pictured speaking at the School of Medicine's peaceful protest earlier in June. (Photo by Paula Burch-Celentano)

The $5,000 scholarships are awarded annually to five outstanding third-year medical students who are leaders in addressing the educational, societal and healthcare needs of racial and ethnic minorities in the United States.

“Through his own extraordinary example and through the work of the nonprofit he co-founded, Russell Ledet is inspiring more Black and other students of color to unapologetically pursue their dreams of becoming physicians,” said Tulane University President Michael Fitts.  “We’re so proud of him and his dedication to making the field of medicine more equitable, inclusive and more representative of the nation as a whole.”

“Russell Ledet is the personification of Tulane’s values.”

“Russell Ledet is the personification of Tulane’s values,” said Dr. Lee Hamm, senior vice president and dean of Tulane University School of Medicine. “His thoughtful approach to creating a constructive dialogue around the issues of healthcare inequity is an inspiration to those around him, and we are extremely proud he is a member of the Tulane community.”

Ledet made headlines around the world last December when he organized a trip to Whitney Plantation in Louisiana for members of Tulane’s Student National Medical Association. He and 14 other Black classmates posed for a series of pictures in front of the plantation, one of the few dedicated to telling the experiences of enslaved people in the South.

The powerful photos of 15 Black medical students standing proudly in their white coats where so many were denied a future quickly went viral. He and his classmates were featured in USA Today, NPR, The Washington Post, CNN, Essence magazine, NBC News and more than 400 media outlets across the globe.

The students spurred a national conversation about Black excellence and the need for greater representation in medicine for people of color. African Americans make up 13 percent of the population in the United States, but account for only 5 percent of physicians and less than 7 percent of medical students, according to the AAMC.

The students formed a nonprofit called The 15 White Coats to get as many as 100,000 of the photos into K-12 schools across the country to inspire more young Black students to pursue their dreams in medicine. Ledet is president and manager of the nonprofit, which also raises money to help medical school applicants of color pay for the application process, which averages around $3,500 to $10,000 per student.

This month, Ledet made national headlines again. On his first day of clinical training for surgery, he posted an emotional video from the parking lot of Baton Rouge General Medical Center. It was the same hospital where he worked years ago as a security guard who would ask doctors what it was like to be a physician. Many didn’t notice him.

“Even some of the people I used to work with who were security guards used to laugh at me when I would tell them, ‘One day, I will be a doctor,’” he said in the video. “When I was growing up, I didn’t even know of a Black doctor — I didn’t know of any. So for this moment to come full circle is priceless.”

Teen Vogue wrote about his unconventional path to medicine and People, Good Morning America, CNN, NBC Nightly News and more picked up his inspiring story of determination and perseverance.

“Russell is the ideal recipient of the Herbert W. Nickens Medical Student Scholarship,” said Bennetta Horne, director of the Office of Multicultural Affairs at Tulane University School of Medicine. “His leadership efforts among his classmates here at Tulane School of Medicine, with his colleagues in the 15 White Coats organization, and in the community align perfectly with Dr. Nickens’ contributions to diversity and equity in medical education.  His efforts will have a major effect on the reduction of health disparities and will show countless youth that medical education is a tangible opportunity for their futures.”