All are winners in Special Olympics basketball game 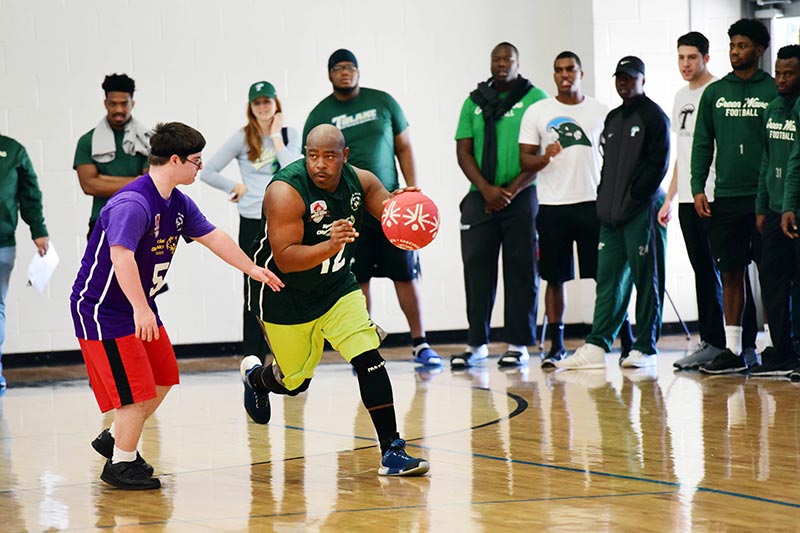 “Tulane has been an incredible partner of Special Olympics for the last two years,” said Gabe Feldman, associate professor of law and director of the Tulane Sports Law Program.  “We’ve made a big push to have more unified sports in Special Olympics, to have people with and without special needs playing on teams together.”

Feldman was involved in the movement to relaunch Special Olympics in New Orleans. In 2016, a unified intramural basketball team was formed at Tulane. Games resume in March. A unified touch flag football league will also be established this year.

“These events are as rewarding—if not more rewarding—for the Tulane students as they are for the special needs athletes. It’s an exciting event all around.”

Jennifer Hew, associate professor at LSU Dental School and state dental director for Special Olympics Louisiana, was excited to participate in the event.

“We run a lot of programs for Special Olympics at the dental school,” she said. “It means a lot to the students. They love to do outreach projects, and as soon as I told them about this game, they were pumped to come.”

Above all else, Feldman believes the opportunity to involve the special needs community with the Tulane community is exciting for both parties.

“These events are as rewarding—if not more rewarding—for the Tulane students as they are for the special needs athletes. It’s an exciting event all around.”